The school bus driver, an old friend of Jaime Sommers, is pursued by criminals because he once witnessed a murder.

Harry Anderson, the school bus driver, arrives at the Ventura Air Force Base to transport Jaime Sommers and her students to the park for a picnic. Anderson helped to prepare for the day's fun, but realizes that he has forgotten the baseball equipment at the local garage, Harry's Service Station, which he owns. Making a quick stop to retrieve the equipment, Anderson is seemingly recognized by Glen Morgan, who along with his associate Raines, stopped at the garage to repair their car. Both men are suspicious looking, but it is Morgan who is disturbed that he can't place Anderson's face with a name. Leaving the station, Raines hands Morgan the receipt to put in the glove compartment, next to the gun.

Upon arriving at the park, the children run off to play, Anderson prepares the barbecue, and Jaime uses her bionics to quickly make hamburger patties. While Anderson starts the hamburgers, Jaime makes an attempt at casual conversation by asking about his past. However, Anderson deflects each of the questions, sending a signal to Jaime not to push any further.

Having moved to the field, the boys organized a baseball game and are upset at the arrival of the girls, who also want to play. Mark, in particular, makes his objections known to Jaime about including them in what he believes is clearly a boys sport. After a brief argument, Jaime makes the boys a deal: they can play the game by themselves if they can strike her out. The boys agree and take their place on the field. At the same time, the girls take their place off to the side to cheer Jaime on. Unfazed by Mark's taunts about her first two strikes, Jaime hits the ball on the third pitch. Much to the dismay of all, the Bionic Woman literally hits the ball out of the park.

As the field trip ends, the bus makes various stops near groups of parents waiting for their children. With one stop left, Jaime and her students engage in a group sing-a-long of the old time favorite, "Bingo". Suddenly, during the fourth round, while going down a one-lane hill, the front left tire on the bus blows out. Anderson attempts to navigate the bus down the hill, but it swerves off the road and crashes into a tree. A fire starts under the back of the bus, and the occupants realize that they are trapped by a giant boulder lodged against the door. To create a distraction, Jaime instructs Anderson to try to open the emergency exit. She uses the opportunity to give the door at the front of the bus a bionic kick, which breaks the boulder in two, and provides a clear path needed to escape . The occupants race to exit the bus, but there is one who is left behind. Anderson rushes back into the burning bus and rescues Caroline seconds before it explodes.

When Anderson next arrives at the base to pick students up, Jaime asks him to come inside. Once they get to her classroom, which seems to have been deserted, the kids leap out to surprise Anderson with a framed thank you. He is appreciative, but appears upset by the picture of himself that is set behind the frame. As it turns out, Anderson has reason to be worried about the photo that was used.

Unfortunately for the bus driver, his heroic act is reported in the national press. Morgan sees the picture in the newspaper and remembers that he knew Anderson sixteen years ago in Chicago. Believing that Anderson is worth a great sum of money, Morgan and Raines return to Ojai and call Mr. Stone in Chicago to negotiate the worth of Walter Krueger. Stone offers Morgan $10,000 to deliver Krueger, but warns him not to be sloppy because he doesn't like mistakes. Upon hearing the warning, Morgan immediately plots to first blackmail Anderson before turning him over to Stone.

Morgan and Raines go to Jaime's apartment seeking information about Anderson's past. Once they leave, Jaime questions their motives and decides to go to Harry's Service Station to ensure that Anderson is not in trouble. Morgan and Raines have already arrived and badgered Anderson into admitting that he really is Walter Krueger. The reason he changed his name fifteen years ago is because he witnessed a murder. He is told to come up with $20,000, or Morgan and Raines will call Stone and reveal his true identity.

Moments after the two men leave, Jaime arrives and hears Anderson loading a gun. Jaime asks about the identity of Krueger, leading Anderson to provide an explanation. He worked at a nightclub in Chicago as a comedian. The owner did business with the mob, and the mob sent a hit man named Stone, who killed the nightclub owner. Anderson witnessed the killing and ran, avoiding the police and Mr. Stone. Jaime convinces Anderson to let Oscar Goldman of the OSI help him.

Mr. Stone meets Morgan and Raines at the door of their hotel, wanting to know the location of Krueger. The three men arrive at the Service Station just as Jaime and Anderson are preparing to leave. As Morgan and Raines enter, Anderson tells Jaime to hide, and pulls out his gun. Morgan grabs the gun out of Anderson's hand and begins to search for Jaime. She uses her bionics to push an elevated car, first into Morgan, and then Raines before throwing a cylinder of oil to the ground to slow them down. This gives her and Anderson enough time to escape to the Air Force Base, but not without Stone following behind them.

In Major Don Mills' office, Jaime is contacted by Colonel Steve Austin, who informs her that he will arrive to pick up Anderson personally to escort him back to Washington, D. C. Jaime and Anderson then go to her classroom, not knowing that Stone has stolen a truck, giving him access to the base. Jaime goes to the supply room, leaving Anderson alone. Stone enters the classroom and threatens Anderson with a gun, but he narrowly escapes, running into an open hanger with Stone right behind him. Jaime returns, and finding her room disheveled, runs bionically to the hangers to find Anderson. Jaime uses her bionics to jump onto a scaffolding to search for Stone. Upon finding him, she leaps down, landing on his shoulders and knocking him into a wall of boxes.

Steve arrives at the base to pick up Anderson, and is informed by Jaime that they have Stone in confinement. As Anderson says his goodbyes to Jaime and walks with Steve to the car, Jaime hears him express how remarkable he thinks she is, but knows that no one would ever believe him if he told people what he saw her do.

Jaime: (calling after her students as they madly run for the school bus) Hey guys, this is supposed to be a picnic, not a wargames!

Jaime: Harry, you've got to be about the sweetest guy that ever lived. How come some lady hasn't snatched you up yet?
Harry: Well, because I always say "no". I've been waiting for you, honey. But I should've known by the time you grew up, I'd be way too old for you.
Jaime: You're not old.
Harry: I used to drive you to school when you were a teenager.
Jaime: Yeah, and I was in love with you then, so that has nothin' to do with it.

Jaime: (trying to convince the boys to let the girls play baseball) Now, how do you know they're not good enough if you don't play with them?
Mark: Hey, everybody knows that girls don't play sports as well as boys.
Harry: Oh, you'd better watch it, Mark. You're talking to a top-seeded tennis player.

(Mark prepares to pitch to Jaime).
Jaime: But remember, if I make a hit, you guys gotta start your game over again, and anybody who wants to play, plays.
Mark: She ain't got a chance.
Jaime: 'Hasn't' got a chance, thank you.
Mark: (mocking) "Hasn't got a chance."
Harry: C'mon, play ball! (the girls start cheering; Jaime swings and misses on the first pitch) Strike one! (more cheering; Jaime swings and misses again) Strike two! I think you're in over your head, Jaime!
Jaime: Ah, I'm just warming up.
Mark: (smirking) Want me to ease up a little bit?
Jaime: (makes a "bring it on" gesture) Just pitch the ball, alright?
(There's more cheering, and Jaime bionically makes solid contact with the ball, sending it flying into the stratosphere. The kids watch in amazement as if flies off, then they all chase after it. Jaime covers her face with a sheepish "oops".)
Mark: Well, you got a hit - but you lost our ball.
Jaime: Gee, I... I don't know my own strength sometimes.
(Mark throws down his glove in disgust, then goes to help look for the ball. Jaime watches them go, then listens in.)
Gwen: I found it! Now you guys have gotta let us play!
Mark: Okay, but I hope you aren't as good as Miss Sommers.

Jim: Ajax threw a shoe this morning, and the blacksmith's out of town for a week. I'm just not having any luck with this thing.
Jaime: Well, it's no wonder. You're supposed to be doing it under a spreading chestnut tree...
Jim: Very funny. Problem is... getting the shoe to fit. Of course, if I had a forge...
Jaime: Well, you don't have a forge, but you've got me. (bionically bends the horseshoe) How's that? See if that works.
Jim: Well, I'll be darned. If I just had the right kind of hammer...
Jaime: Oh, c'mon Jim... you're such a con artist. Gimme the nails... (to Ajax) Ready for this, kid? (bionically nails the shoe into place) Okay... you're welcome, Ajax.

Harry: It's funny, about a classroom with no kids in it. Doesn't seem right somehow.
Jaime: That's 'cause you're not a teacher.

Jaime: How are you feeling?
Harry: Like I'm waking up from a fifteen year nightmare.

Jaime: We have a little surprise for you too, kiddo. We've got Stone already in confinement.
Steve: You guys don't fool around, do ya?

There are several subtle and not-so-subtle changes to the opening title sequence from the prior two episodes (Welcome Home, Jaime (Part II) and Angel of Mercy). The version of the credits which debuts here would be used for the remainder of Season One

Mark, Caroline, and Teddy honor Harry with an award 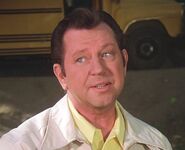 Add a photo to this gallery
Retrieved from "https://bionic.fandom.com/wiki/A_Thing_of_the_Past?oldid=32960"
Community content is available under CC-BY-SA unless otherwise noted.