Josh Lang experiences physiological problems upon returning from space. Steve attempts to salvage his friend's career while also trying to save his life.

While Josh Lang, a fellow NASA astronaut and friend of Steve Austin, is orbiting the Earth, his brain is affected by an electrical field which causes him to behave in an increasingly bizarre manner. Following Lang’s return to Earth, Steve meets him at the Ocean World Amusement Park and offers to work with him in the hope that the condition is only temporary and can be overcome so that his career as an astronaut can continue. However, Lang shows no signs of improvement. When he climbs an electricity pylon calling the name of someone called “Andy” (even though no one is there), Steve has to rescue him using his bionic powers. He concludes that Lang is unfit to fly and should be ‘grounded’ in order to receive appropriate medical attention.

When Lang becomes agitated and violent after he detects what he is convinced is a programming error on the NASA computer, Lang is placed under Military Police guard in a NASA hospital. However, at night he slips out unnoticed by disabling the guard and swapping places with him. He then leaves a note for Steve, asking him to again meet him at the Ocean World Park. When Steve arrives, Lang demonstrates telepathic skills by communicating with the park’s dolphins and making them jump out of the water at will. He then makes the extraordinary proposal that dolphins should be involved in the space program. Steve persuades Lang to accompany him back to NASA headquarters where he puts the dolphin proposal to the flight director, Calvin Billings. Unsurprisingly, Billings completely rejects the idea and then asks to speak to Lang alone. While Steve is out of the room, Lang renders Billings unconscious with his psychic powers and escapes once more.

Looking through Lang’s NASA file, Steve notices that the beneficiary of an insurance policy is an Ernesto Arruza of Redman, Texas – Lang’s hometown. Guessing that ‘Andy’ was related to Mr. Arruza and that Lang will travel to Texas, Steve goes to see Arruza. He confirms that Andy was his son and that Andy had been close friends with Lang at the time Andy was accidentally killed while the boys were playing in a nearby power station. Andy was ten years old at the time. Meanwhile, having been alerted that Lang may be in the area, the local police are also looking for him. When he is confronted by a deputy sheriff, Lang attempts to render him unconscious but, with the power of his brain increasing, Lang inadvertently kills the deputy in the process. Obsessed with the memory of his childhood friend, Lang then climbs the towers at the power station in an attempt to relive Andy’s death. Steve attempts to persuade Lang to come down, telling him that he had correctly identified the error on the NASA computer. When Lang refuses to do so, Steve climbs up after him. Lang again resists and starts to incapacitate Steve. However, the electrical energy from his brain reaches fatal levels, and Lang collapses and dies in the process. Lang will be given a "hero's funeral," and Steve says goodbye to his old friend.

The scenes of Oscar fully supporting NASA's efforts to test, and even film, Steve's bionic powers is something new. Many other episodes portray Oscar's unwillingness to part with the knowledge of Steve's bionics, even to other employees of the US government (see, for example, his hesitation to allow Steve to go on the rescue mission in "The Rescue of Athena One"). The general impression Oscar gives is that specific knowledge of bionics is reserved, as much as possible, only to those under his direct command. Given the relatively lax security on NASA personnel records that we see in this episode, Goldman's caution seems wise.

In "The Rescue of Athena One," Steve makes no mention of his bionic failure to the Flight Surgeon, despite the fact being directly relevant to the success of the mission. There, he makes oblique reference to his bionic problems that only Oscar could understand. But here, Oscar lets NASA go over Steve with a fine-toothed comb — when there is no reason given for any medical tests.

The explanation may rest in simple story progression, evolution, and for dramatic purposes, a big reveal. Oscar may have decided to expand "the circle of trust," for reasons that may benefit the OSI. NASA's equipment and/or expertise may have been uniquely suited to acquiring comprehensive data on Steve in advance of future bionic replacements. The clear shock on the faces of the NASA people indicate this is not something they were prepared for.

Lang: (during spacewalk) Mission control, I got some news for ya that's gonna shock ya, so you'd better sit down. Listen very carefully: The Earth is flat, gentlemen. That's right; it's flat as a table! (chuckles) Hey, wait a minute; there's an elephant holding up the table! And... there's something holding up the elephant... Wait; it's a rhinoceros holding up the elephant. Hey, wait a minute; there's such a... big cloud cover, I can't make out what's holding up the rhinoceros. It's - wait, it's - Oh, no, oh, ah, gentlemen I, I, I, I don't know how to tell you this; I'm just gonna have to... come right out and say it: the table, the elephant, the rhinoceros are all being held up by a beautiful, a gorgeous 20-year-old girl. There goes the old ego, amongst other things...(chuckles some more)

Ted Haldane: How do you do it? You were doing 66!
Steve: You know as well as I do. Better!
Ted Haldane: Nah, I mean, how do you know when your stride is right?
Steve: Well, I feel a sort of… natural rhythm in my upper body.
Ted Haldane: Don't your legs ever run out from under ya?
Steve: Not any more.
Oscar: Running, using your bionic capacities: it's all instinct now, isn't it, Steve?
Steve: Yeah.

Lang: Hey, old buddy, you're... you're kind of special.
Steve: That's what they keep saying.
Lang: With your bionic strength and my "far out" brain, we're superior types. Think about it, Steve. We're the beginning of a whole new species.

Lang: Do you realize what we could learn if we send one of those dolphins up into space into that electrical field? Why, there's no... mystery in the universe that you and I couldn't solve!

Oscar: Josh is right; there is a mistake in the computer program.
Steve: And his "sun-as-the-origin-of-space" theory?
Oscar: Completely valid. I've got all the printouts here to prove it.

Following a series of physical tests, Steve speaks with Lang.

Steve meets with Lang to assess his friend's behavior.

Lang prevents Steve from helping him. 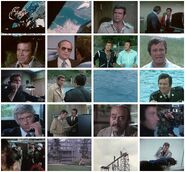