A Soviet launch of a probe to Venus malfunctions, bringing the probe down in the United States. Because it is made of a new alloy, unknown to American technology, Soviet scientists and agents are anxious to recover the probe, which has landed in a remote section of Wyoming. A farmer who encounters it fires his gun at it, and the probe retreats, causing consternation among locals.

The Soviets alert their agents stationed in the area (one even operates a very capitalist gas station), using the phrase "Have you looked at the sky lately?", while they secretly move the probe's designer, Irina Leonova, there with equipment to order the probe to shut down, accompanied by the KGB's Major Popov, who has a missile to pierce the probe's shell. The probe does not respond to the shut-down order, then Irina recalls the farmer shot at it, so the computer might reason it was near a volcanic eruption and be moving away, on "total override".

Steve Austin and the OSI arrive, and Steve recognizes Irina. During an encounter, Irina and Major Popov are sent on the run by the probe, and Steve tracks the probe. When Irina regains consciousness, Oscar tells her that Steve is tracking the probe and she is alarmed - she designed the probe for Venus' hostile environment, making it almost indestructible - more so than a bionic man.

With the probe still operating as if it has landed on Venus, it is on a course leading to a small town as Soviet and American forces try desperately to stop it.

Oscar: Irina, you know that Steve is bionic. If he's careful ...

Irina: You don't understand. I designed that probe for Venus. Venus Oscar. A planet with temperatures of 900 degrees, 300 mile per hour winds, pressures up to 90 earth atmospheres. Even a bionic man couldn't survive under those conditions.

Oscar: And anything that could would be more powerful than ... Steve.

The Soviet Union sent several landers to Venus in the 1970s and 1980s, the only nation to do so. None of these landers were mobile rovers like Death Probe, however. 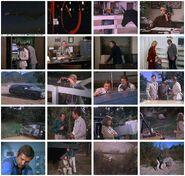 "There's nothing on Earth that can stop it now"

Irina and Oscar are concerned for Steve

Steve is struck while trying to lift the Probe

The Future of the Death Probe (Crimebuster)
Add a photo to this gallery
Retrieved from "https://bionic.fandom.com/wiki/Death_Probe?oldid=33889"
Community content is available under CC-BY-SA unless otherwise noted.