A new line of fembots emerge under the control of Carl Franklin, the son of the deranged Dr. Franklin, in a scheme to steal America's first directed energy ray weapon.

Callahan: (sees the Callahan fembot) Oooh... that thing is like seeing myself dead. I can't stand to look at it.

Franklin: The three people who destroyed my father are all in that room. They have much to answer for... and will.

Fembot Callahan: We have come for the energy ray weapon. And we're going to get it.

Jaime: Hey, are you feeling alright?

Kyler: Yeah, I won't just keel over. It might take weeks before I meet the, eh, germ with my name on it.

Jaime: Oscar, are you alright?

Oscar: A little headache, but I got away.

Jaime: Uh... they have the directed energy weapon. Now I'm sure they're gonna try to put it into orbit on the space booster that Rudy's using to launch the telescope at Vandenberg.

Oscar: We're not beat yet, Jaime. I'll call the base and have the air police waiting to meet them.

Jaime: Yeah, with tanks, I hope. 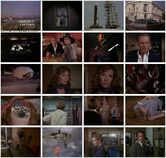 Collage from episode
Add a photo to this gallery

Add a photo to this gallery
Retrieved from "https://bionic.fandom.com/wiki/Fembots_in_Las_Vegas?oldid=33284"
Community content is available under CC-BY-SA unless otherwise noted.