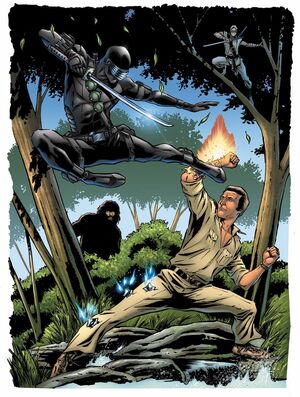 The series will be scripted by rising star writer Ryan Ferrier (TMNT: Dimension X, Rocko's Modern Life) with art by SL Gallant, who has achieved an epic run on G.I. JOE: A Real American Hero, alongside legendary G.I. JOE writer, Larry Hama, for over 75 issues.

"To say Shannon and I are having fun with bringing these two iconic properties together would be a massive understatement," said Ferrier. "We are going full-tilt and no-holds-barred with this story. It's everything we love about G.I. JOE, the classic characters, and massive action, colliding face-first with the steel-infused, secret agent coolness of The Six Million Dollar Man. We are chomping at the bit for everyone to read this comic with a kung fu grip."

"Ryan and Shannon have found the perfect story to tell," said IDW's Editor in Chief, David Hedgecock. "Fans both new and old are going to be amazed at what this creative team is putting together. This series beautifully blends all the classic tropes of the characters while simultaneously creating something exciting and fresh. We are thrilled to be working with this team and with the fine folks at Dynamite to bring this series to the fans."

"G.I. JOE and Steve Austin, The Six Million Dollar Man, are two pop culture mainstays who have influenced the comics industry for years," said Dynamite CEO/Publisher Nick Barrucci. "We've had great runs with our Six Million Dollar Man series, and long been admirers of IDW's ongoing G.I. JOE series. Now is the time for these two to cross-over and we couldn't be more excited to be collaborating on this event series, and working with our good friends at IDW."

Variant covers will be provided by John Cassaday, Ken Lashley, and Mike Zeck. Special action figure covers will also be may orderable from your local comic shop. Subject to availability while supplies last.

The action-packed cross-over event of 2018 kicks off this January!

Dynamite was founded in 2004 and is home to several best-selling comic book titles and properties, including The Boys, The Shadow, Red Sonja, Warlord of Mars, Bionic Man, A Game of Thrones, and more. Dynamite owns and controls an extensive library with over 3,000 characters (which includes the Harris Comics and Chaos Comics properties), such as Vampirella, Pantha, Evil Ernie, Smiley the Psychotic Button, Chastity, and Peter Cannon: Thunderbolt. In addition to their critically-acclaimed titles and bestselling comics, Dynamite works with some of the most high-profile creators in comics and entertainment, including Kevin Smith, Alex Ross, Neil Gaiman, Andy Diggle, John Cassaday, Garth Ennis, Jae Lee, Marc Guggenheim, Mike Carey, Jim Krueger, Greg Pak, Brett Matthews, Matt Wagner, Gail Simone, Steve Niles, James Robinson, and a host of up-and-coming new talent. Dynamite is consistently ranked in the upper tiers of comic book publishers and several of their titles - including Alex Ross and Jim Krueger's Project Superpowers - have debuted in the Top Ten lists produced by Diamond Comics Distributors. In 2005, Diamond awarded the company a GEM award for Best New Publisher and another GEM in 2006 for Comics Publisher of the Year (under 5%) and again in 2011. The company has also been nominated for and won several industry awards, including the prestigious Harvey and Eisner Awards.

Retrieved from "https://bionic.fandom.com/wiki/G.I._JOE:_A_Real_American_Hero_vs._The_Six_Million_Dollar_Man?oldid=33110"
Community content is available under CC-BY-SA unless otherwise noted.