Mark Wharton's organization heists an armored car with $100,000 in payroll along with the Navy's top code book. Wharton realizes the code book will fetch a hefty price on the international market. Steve Austin teams up with pretty E.S.P. expert Audrey Moss in a magic act in order to impress the mobster and gain his confidence in the hopes of getting a lead on the purloined book.

Steve: Collins, where would he keep such a notebook?
Collins: Well, normally in his safe, but then, he hasn't been too normal lately.

Steve: (about to show Oscar a card trick) At no time will my fingers leave my hands.

Steve: Audrey, you don't have to use that gift of yours all the time. Like I don't have to use bionics. Now if I wanna get to the second floor of a department building, I don't leap up, I can take an elevator.

Audrey: We really make a super pair, don't we?
Steve: We do sure do.

Audrey: You're holding Steve prisoner!
Wharton: I was wondering how soon you'd pick that up. (laughs) You are truly a marvel.

Steve: Here you are, my lady, the pumpkin ride is over.
Audrey: Oh, gee and I didn't even get to keep my glass slippers. Oh well, thanks for the ride.
Steve: I just wanted to make sure you didn't run away for a wicked life on the stage. Make sure you got back on the groove.
Audrey: Yeah, back in the groove... 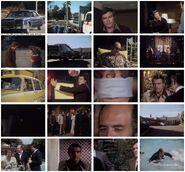