When a male OSI agent goes missing after infiltrating a "lady wrestling" club in Washington, Oscar asks Jaime to try out for the team so she can find out what happened to him.  Jaime reluctantly agrees, and quickly makes a friend in one of the stable, while another is secretly in cahoots with management in the form of "Mel Bigelow," (a.k.a. Norman Fell).  While Jaime and her new friend, April Armitage, train for an exhibition match that night, Bigelow contacts his boss, a Soviet agent inside the OSI!  Seeking to get closer to the back office operation, Jaime has April make an introduction, not knowing that Bigelow has already been tipped off to her identity.  She nevertheless saves the day at the last minute, with April's help, unmasking the would-be Soviet triple agent and saving a gadget vital to national security as well.

Jaime: So, how long has it been since you've heard from him?
Oscar: Three days. Wayne Haley has been one of our most reliable agents. Something must've happened to him.
Jaime: Well, are there any leads at all?
Oscar: (takes off his glasses) That is why you're here, my dear.
Jaime: Uh-oh.

Oscar: Jaime, listen to me. (Jaime puts her head down on Oscar's desk to pout) Wayne Haley has disappeared trying to tell us something important. Now, you're the only female OSI agent that can handle this case!
Jaime: I don't suppose you'd consider putting Steve in a dress? (Oscar gives her a reproachful look) I didn't think so. (sighs) Lady wrestling?!?!

Jaime: (reading the names on the marquee) Mad Mary? Amazon April and the Spider Lady? Oh boy... average girls next door calls for a stick of gum.

(Instructing Amazon April to hit the mat while pinned by Mad Mary)
Bigelow: Harder, like you're suffering, not like you're making pizza.

Bigelow: You... uh... lookin' for somebody?
Jaime: Yeah... I'm... uh... lookin' to get into the wrestling game. Eventually. I could be an apprentice or somethin'.
Bigelow: (amused) Wrestling. Whataya weigh - about 105? 110 if you eat a bunch of bananas?
Jaime: Okay, I'm not so big, alright? But I got some pretty fancy footwork and I got a darn good right arm.

Jaime: (climbing into the ring for a wrestling audition; mutters under her breath) Oscar, I'm gonna break your glasses for this.

April: How did a little skinny thing like you ever learn to wrestle like that?
Jaime: Oh, eh, I had this coach, his name was eh, Rudy Wells, he kind of put my style together.

(Camera pans up Jaime dressed in an American Indian costume).
Jaime: Are you sure Pocahontas started like this?
April: (laughing) You look great!
Jaime: I feel ridiculous!

Oscar: It's amazing, doctor, that a unit this small can be the brain to operate an entire surveillance satellite.
Dr. Brandes: Yes it is. It would have taken years longer to perfect it in my countries laboratories.
Oscar: That's part of the reason why you defected, isn't it?
Dr. Brandes: It certainly was not for your vodka. There's not even a fireplace around to throw the glass into!

(acting the part as 'Savage Sommers')
Jaime: I'm telling you, Jimmy, Battling Betty, she's gonna get the axe tonight. She's really is gonna get the axe tonight. And if you're out there watching, sweetheart, I got a rhyme for ya: If you show up tonight, you can trust that you're gonna eat my dust when I break you in half everybody's gonna laugh and say bashful battling Betty's a bust!

Bigelow: I understand you're anxious to pick up some fast cash.
Jaime: The faster, the better.
Bigelow: Well, that'll be no trouble at all. (injects Jaime with a knockout drug; she collapses in a heap)
April: Jesse!
Mary: Wow, that stuff's worse than Esther's drop kick.

Jaime: (wakes up in "The Cage", hanging high over the ring) Oh! I never thought I'd get to the top of the business this quick!

Oscar: But I've never been to a massage place, Jaime.  I mean . . . .
Jaime: Well it'll be a whole new experience for you.  You're gonna love it.  Trust me.
Ocsar: Well you know what happens in Washington.  I mean you gotta be careful though . . . 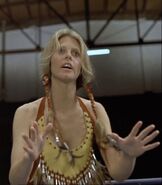 "Savage" Sommers tries not to fight

Jaime breaks out of "The Cage"

Photo press release
Add a photo to this gallery
Retrieved from "https://bionic.fandom.com/wiki/In_This_Corner,_Jaime_Sommers?oldid=32970"
Community content is available under CC-BY-SA unless otherwise noted.