Jaime meets a mysterious woman who claims be her biological mother — but Jaime's parents died in a car crash ten years ago. Oscar arrives to investigate and unearths information that may prove her story. But he must act fast as dangerous men have followed her to Ojai — and to Jaime.

A woman is driving to Ojai, evading two men who are trying to kill her. Meanwhile, Jaime Sommers awakens from dreaming of her childhood to a mysterious phone call about her parents graves being vandalized. At the cemetery, Jaime sees that the headstones have not been disturbed, but recognizes her childhood dog Puzzles, and sees a mysterious woman in a car that reminds her of her mother. When Helen Elgin hears of the incident, she questions whether or not Jaime could have imagined it. Jaime visits the house she grew up in to see Puzzles. As she is leaving she sees the same mysterious woman and unsuccessfully chases her. Returning back to the Elgin's, Jaime finds Oscar Goldman waiting for her. He tells Jaime that while her parents were college professors, her mother was also an agent for the U.S. government. The two men, Vic Boylin and Henderson, drive to Ojai while discussing Chris Stuart's motives for seeing Jaime and their plans to kill her. As Jaime sits in her coach house reading the report about her parents, Mrs. Noah calls to tell her that a woman resembling her mother was going to pay last respects to an old friend. Jaime realizes that she will be at the cemetery and bionically runs to meet her. At the cemetery, Jaime confronts the woman who admits to Jaime that she is her mother.

The woman agrees to explain, but wants to leave. She claims that the woman buried as Ann Sommers is really Chris Stuart, and now the people that caused the accident that killed Stuart and James Sommers are after her. Stopping to talk, Stuart claims that she has watched Jaime building a good life for herself, and had nothing to offer her. She claims that the government thought she could still be useful if she was thought dead, so they erased her existence. Knowing that Jaime trusts Helen, Stuart suggests going to see her. Boylin and Henderson arrive in Ojai. At Helen’s, Stuart recalls telling Helen to replace her old furniture. Stuart moves to the Elgin’s bookshelves and picks up Jaime’s tennis racket, upset by this, Jaime bionically breaks the back of a chair. Jaime then asks for proof that she is her mother by telling her something only her mother would know. Stuart tells Jaime that on the day of the accident, before she left, she gave Jaime a present, indicating Jaime's necklace. This convinces Jaime. Oscar reads Ann Sommers’ file, which explains the existence of Chris Stuart. He orders an exhumation of the body buried in Ann Sommers’ grave to ensure that it was Stuart that was buried.

Jaime demonstrates her bionics for the woman she thinks is her mother by jumping onto a tree limb, running across a field, and lifting an old tractor. She wants to make plans for the future, but Stuart tells Jaime she became a double agent and is hunted by both sides. Back at the coach house, Oscar calls Jaime to warn her about the situation. Jaime tells Stuart that she has money saved. Jaime bionically hears Boylin and Henderson approaching and the two ladies run from the coach house. Just as the two men take aim on Stuart, Jaime throws a bail of hay at the them and locks them in the barn. She then pulls a tire from their car, tossing it aside before the two ladies drive off. Mark Russell gives Oscar the results of the exhumation, proving conclusively that Ann Sommers was the women buried in the grave, and the two race to find Jaime and Stuart.

Oscar goes to the coach house, where he tells Helen about Stuart. He fears that Stuart might sell Jaime to the other side in order to save herself, and calls to order an “all points bulletin” on Stuart. Jaime emerges from the first bank where she has withdrawn money to give to Stuart. Stuart tells Jaime she will not take anymore from her and they make their way to the airport. On the way, Boylin and Henderson catch up and run the car off the road. Stuart speaks to the two men and convinces them not to harm Jaime. Saying goodbye, Stuart tells Jaime to wait until they have left before going anywhere. Jaime follows their car and bionically pushes a tree in its path. As Jaime bionically rips the door from the car, Stuart struggles with Boylin over his gun. During the struggle, Stuart is shot in the stomach. Jaime comforts Stuart, who admits that she is not Jaime’s Mother.

In the hospital, Jaime brings Stuart yellow roses and tells her that she could receive a lesser jail sentence in exchange for information. Jaime then questions Stuart on why she didn’t turn her over to save herself. Stuart explains that she was close to Ann and just wanted to come back to the only place she had ever felt safe and loved. Back at the Elgin’s, Helen admits that she was jealous, but Jaime tells her that no one could replace her and what they have shared.

Helen: Ann, so it really is you?
Chris (solemnly): The shattered remains.

Helen: You could've imagined it all, Jaime.
Jaime: Helen, it wasn't a dream. I'm sure it wasn't. It was her voice - and I only got a glimpse of that face, but I would swear it looked just like my mother.
Helen: Honey... I wanna believe you, but I was at the funeral, and so were you. Maybe it was the power of suggestion, with the dreams starting...
Jaime: Starting what? An entire train of hallucinations?
Helen: Well, all things considered, I don't see how she was there - do you? Look, Jaime. Oscar's at the base. (picks up the phone) Let's call him...
Jaime: (slams down the phone) No! What're you gonna tell him? Helen, I am not hearing bells that aren't ringing, or voices that aren't talking, and I'm not seeing people that weren't there! (sits on her bed) Look, I know you're trying to help me, but you're really not making things any easier.

Helen: Oscar and Rudy asked me to keep an eye on you.
Jaime: (outraged) "Keep an eye on" me?!
Helen: Yes! So they might catch any new problem early, for your own good!
Jaime: That's really cute. Now they've got you spying on me.
Helen: Spying?! We all care for you! We don't want anything to happen to you!
Jaime: Well, I'll make that unanimous.

Jaime: Awfully nice of you to drop all the nation's problems and come over here, Oscar. Were you afraid I had blown a fuse, literally?
Oscar: I usually carry a spare for my bionic friends.
Jaime: Y'know, I feel like I am getting Special Treatment #5. First, you relax the subject, and then you gently tell her she needs a room with mattress wallpaper.

Ann: The government decided I could go on working and be useful... only if I was believed dead. They erased my existence. They 'sealed off my records' as they politely called it.

Jaime: Mom, do you remember how I used to fall out of trees all the time?
Ann: Yeah.
Jaime: Watch this. (jumps up into a tree, then back down, then goes for a bionic run) Well, here I am, your little girl, with a four-on-the-floor and a 3.7 differential!

Ann: (after receiving an envelope from Jaime) How much is in here?
Jaime: Oh, round figures, about, uh, two thousand, six hundred and twenty four dollars and fifteen cents. Now the next bank is just down the street...
Ann: No, no, no, this'll be enough.
Jaime: I don't think so, Mom, 'cause once you get there, you're gonna hafta live, y'know.
Ann: (firmly) No. Jaime, I didn't come here to take all your money.
Jaime: Well, it's our money. You paid for the tennis lessons.

Oscar: This is Oscar Goldman speaking. I want an all points bulletin out on Chris Stewart, alias Anne Sommers. Now I want everybody in on this. The OSI, the MP's, the California Highway patrol, the local police, everybody.

Jaime: Mothers aren't like used cars. You don't just change models on a whim!
Helen: You mean I'm locked into the job?
Jaime: No, I mean you're stuck with it. And don't tell me you haven't been known to think along those lines yourself. Remember the time I... uh... got a D in Math? Or the time I... uh... bumped the fender of your brand new car? You don't get to share those joys with anybody. 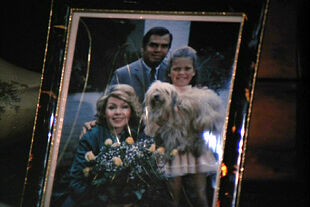 A bedside memory: young Jaime with parents, Ann and James 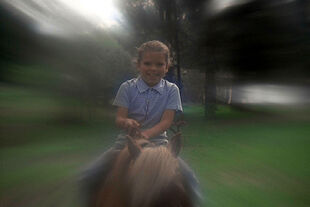 Jaime dreams of riding horseback as a child 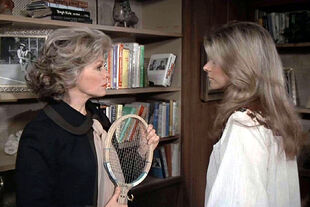 "Are you my mother?" 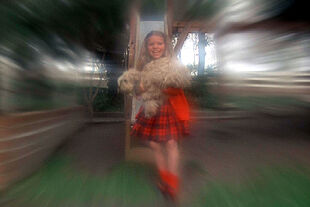 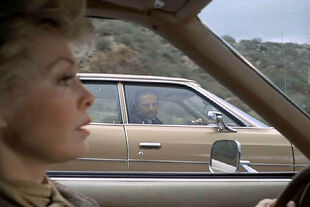 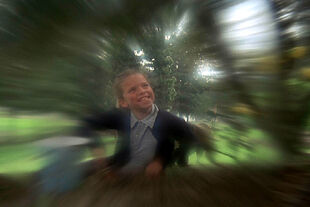 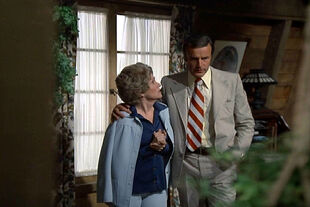 Oscar reveals the truth to Helen 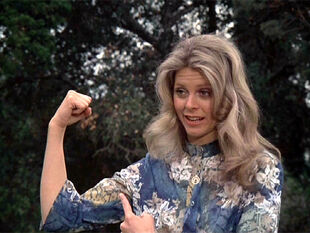 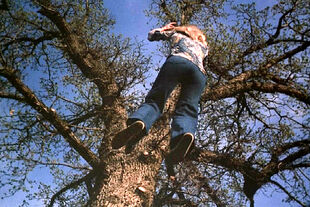 Jaime used to fall out of trees 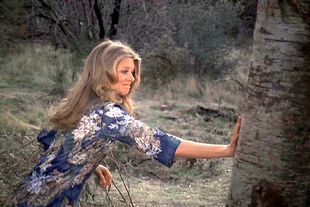 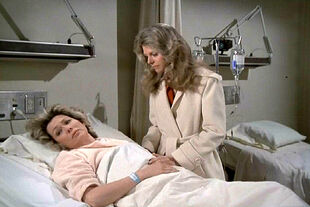 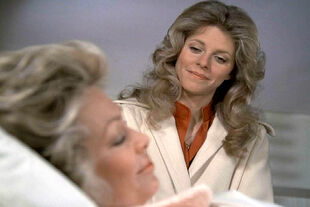 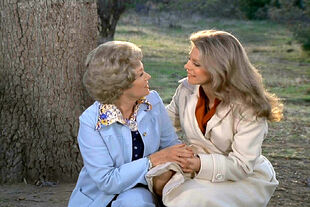 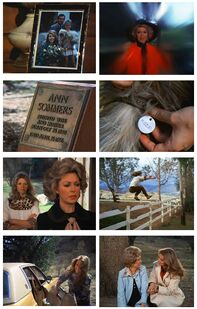 Retrieved from "https://bionic.fandom.com/wiki/Jaime%27s_Mother?oldid=33701"
Community content is available under CC-BY-SA unless otherwise noted.