Jaime enrolls as a police academy cadet to locate a foreign agent. However, she is unaware that the agent has spotted her first and has ordered her execution.

Welton: Going a little fast back there, weren't you, ma'm?
Jaime: Was I speeding?
Welton: Flying low was more like it.

Jaime: Cops can be so pompous sometimes, and this guy was so cold.
Oscar: Jaime... you mean you were stopped by a police officer and given a ticket?
Jaime: Yeah! Ten bucks. He said I was speeding.
Commissioner Hart: Were you, Miss Sommers?
Jaime: Well, two, three miles an hour, five at the absolute outside, but I was...
Oscar: Jaime, I'd like to introduce you to Commissioner Hart of the Santa Regina Police Department.
Jaime: (cringes) Really? Oh...

Godfrey: If those had been real bullets you would be well on your way to St. Peter's pearlies now or worse. You got a lot to learn.

(Jaime listens bionically)
Welton: Now, you see this skinny blonde over there, about to start? Lay you ten bucks she doesn't make it to the finish line.
Godfrey: Alright you got a deal. You got a deal.
Jaime: Okay, Officer Welton. Here's where I get even for that traffic ticket.
(finishes the obstacle course in record time, then trots over to Welton and Godfrey)
Godfrey: Hate to take your money, Bob, but that's one of the fastest times today.
Welton: Mmmm-hmmm. There you go.
Jaime: Ten bucks for ten bucks.
Welton: Ten bucks for...? How'd she know about that?
Godfrey: Y'know, I think these women are gonna surprise us.

Partnow: You know it's amazing the way you can fall in and out of that American accent, like you were born here.
Parker: It took years of training, Partnow.

Welton: Well, your sloppy driving just killed a mother and her two children back there at the turn. I hope you're proud of yourself.
Jaime: Get off it, will you? You were riding me all the way.
Welton: Riding you? If you can't take the pressure in a parking lot, babe, you better forget the street.
Partnow: How'd she do?
Welton: Not too hot. She missed the last four turns and didn't like my tone of voice.
(Jaime watches Smith walk away).
Parker: (leaning in car window) Hey, Jaime? Don't feel so bad. I killed four old ladies, seven kids and an alleycat on my last run. (Jaime laughs) So, come on, chin up! Okay?

Oscar: (yawning) Jaime, I had the night team run another check. You were right. The name on the file is Arleen Smith, but the fingerprints tell us that it's Arleen Hart.
Jaime: The police commissioner's daughter.
Arleen: Told ya.
Jaime: (aside) I'm glad. (into phone) Okay, Oscar, looks like we're back on first base again. I'll just have to call you tomorrow.
Oscar: At a reasonable time, please.
Jaime: Hey, being reasonable is not in my contract.

Jaime: The forged files? How'd you do that?
Arleen: Oh... I got a few friends in the records department to help me out. Matter of fact, they even pulled my file when someone was investigating them before classes started. I thought it was my father.
Jaime: It wasn't. That was Oscar. And all these midnight walks, they were for, uh...
Arleen: Munchies.
Jaime: Munchies. Terrific. (beat) Arlene, I am sorry if I've upset you.
Arleen: No... hey, listen... call me Arly, and it's okay. (threatens Jaime with a drumstick) ... but if you even breathe a word of this to my father...
Jaime: (backing up) Promise!
Arleen: Now, are you going to tell me what you're doing here and who this Oscar is?
Jaime: (grabs the drumstick) On the way back to the dorm. (takes a bite) You muncho.

Jaime: Now, you may not believe this, but there's a foreign agent at the academy.
Arleen: A foreign agent? What does that make you - a domestic one?
Jaime: Very good! OSI.

Jaime: Arly, this thing could get really dangerous. I don't know if Oscar will let me do something...
Arleen: Look, if I could just help you solve this thing, it'd prove to my dad I'd make a good cop. I mean, he'd have to believe in me. Please, Jaime...
Jaime: (after a long pause) I think if I said "no," it wouldn't make any difference anyway.
Arleen: You're right.(Jaime laughs)

(Jaime and Arleen are discussing possible suspects)
Arleen: My money's on Kelly. Did you ever notice that mood ring she wears? It's always black.
Jaime: (laughing) Oh, come on. Listen, what about the nights you snuck out?
Arleen: I was hungry!
Jaime: Well, that's the story of your life, but, I mean, did you see anything strange or unusual or out of place while you were there?
Arleen: (shakes her head, then realization dawns) Wait a sec. I did see a delivery truck a couple of times. (Jaime ponders this) Yeah, I thought it was kinda funny delivering something that late at night.
Jaime: A delivery truck. Ummm... I saw it too. It was a red one?
Arleen: Yeah, red. It was a late model... ummm... one ton step van. I think the license was U... uh... 99-566. Yeah, something like that. Thought it was kinda strange.
Jaime: I think you're kinda strange.

After Jaime completes the driver's course, Sgt. Welton makes a remark about pressure. As a top five ranked tennis player, Jaime has probably faced a little pressure before.

Given that Jaime completes the cadet training course, this presumably means she became an officially credentialed police officer, even though she never revisited this on screen in later missions. 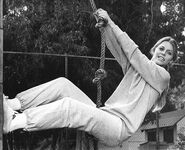