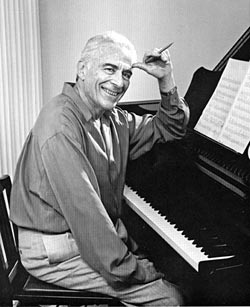 Joe Harnell might best be remembered, by pop culture at least, for his Lonely Man Theme, the haunting melody that characterized David Banner's plight each week on The Incredible Hulk. But throughout his career, which began at age 14 and lasted for more than 60 years, Harnell would wear many hats, including that of pianist, arranger, music director, recording artist, teacher, author, and film composer. He would work alongside such artists as Frank Sinatra, Judy Garland, and Peggy Lee. He would record 18 albums for Kapp, Columbia, and Motown records and earn 4 Grammy Awards. More than 400 hours of original music for movies and television would be recognized with several Emmy nominations and one award for his work on V. In 2000, he would add author to his list of credits with the release of his autobiography titled, Counterpoint. Joe Harnell was 80 years old when he died of heart failure on July 14, 2005.

In his autobiography, Counterpoint, Harnell reveals that there was friction between regular composer Jerry Fielding and producer Kenneth Johnson. As a result, Fielding left Bionic Woman shortly after the start of season one. For production of the episode, Bionic Beauty, Harnell was tapped to write an arrangement of the song, Feelings, for Lindsay Wagner and write a new song for guest star, Bert Parks. This stint turned into an offer to score the episode itself -- which in turn, resulted in an offer to become the regular composer for season two.

For me, it was a good experience, although it did have one negative effect. I was asked to write a new theme to replace Jerry's, but I sensed that wasn't really cricket. I said, "I don't want to do this because Jerry is a dear friend." "If you don't want to do it, we'll get someone else." With some reluctance, I wrote a theme for the main title and closing credits. Jerry called me in a fit of anger, "How could you take money off my table?" I apologized and said, "What could I do Jerry? Should I have turned it down?" "Yes, you should have turned it down." Shortly after that we instituted a policy where they used his opening music and my closing music.

Retrieved from "https://bionic.fandom.com/wiki/Joe_Harnell?oldid=20317"
Community content is available under CC-BY-SA unless otherwise noted.