In a three-part crossover beginning in The Bionic Woman, continuing in The Six Million Dollar Man, and concluding back on Bionic Woman, former OSI scientist, Dr. Franklin plots to kidnap Oscar Goldman as part of a scheme to obtain an experimental weather control device. Meanwhile, Jaime Sommers tests her mettle against Franklin's fembots.

Dr. Franklin, a former OSI scientist, receives a visit from Russian finance minister Baron Constantine who came to America in answer to Franklin’s request of an additional funding for his special project. The Russians are eager to get their hands on a classified OSI Weather Control Device capable of inducing climatic change. Constantine was sent to Franklin's hidden complex to assess the progress made so far with their investment.

Callahan: Dr. Wells did send for you. He's waiting in his office.
Jaime: Oh, yeah? Why?
Callahan: Maybe it's your heel alignment? He could balance your toes.

Rudy: I've developed some sonic techniques that are really revolutionary.
Jaime: I'm not so sure I want a revolution going on in my ear.

Rudy: If these tests prove out my theory, we'll be able to communicate in ultrasonic ranges. Nobody'll hear it but you and Doberman pinschers.
Jaime: Uh... Rudy, now you know I love you, but... uh... if you think I'm gonna come running every time you blow a dog whistle, you're out of your mind.

Steve: We definitely should have a bet on this game - and I have a pretty good idea on what the price should be...
Jaime: You think you can give me a hint without us getting arrested?

Lynda Fembot: Jaime? Mr. Goldman called to cancel your lunch. He left about half-an-hour ago. He had an emergency conference at the State Department.
Jaime: What is this? All my men — they tell me how much they like me and then nobody'll stick around to feed me?

Dr. Franklin: Yes, the girl is valuable. But, my Fembots can do anything she can.
Baron Constantine: Not quite. As a human being, she can think for herself.
Dr. Franklin: Since when is thinking for herself an asset… in a woman?

Jaime: (considering the distance between the ground and Callahan's bedroom window) I'm not that bionic. 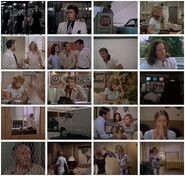 Production photo of stunt woman in mask sans the eyeballs