Steve and Jaime become Oscar and Callahan's only hope of survival when Dr. Franklin uses the weather control machine to repel a military strike force from his island.

Reports on the odd weather conditions recorded in the four corners of the world soon becomes public knowledge throughout the world media. A phenomenon that baffles the meteorologists who cannot provide a tangible explanation as to these extreme occurrences.

At the Hospital, Dr. Rudy Wells informs Steve Austin about a task force conference at the Pentagon but is overly concerned about Jaime Sommers' recovery and refuses to allow her to join in. To prove that she is fit for duty, Jaime grabs a metallic water pitcher and crushes it. Steve pushes the joke even further by suggesting she kick down the bathroom door to finally convince Rudy to accede to her request to return to duty.

Pentagon officials were promptly notified by NSB Chief Inspector Hanson and plans to attack Franklin’s base are soon put into effect. Some proposed launching missiles to destroy Franklin’s satellite communications or even his base altogether but according to Rudy Wells’ theory, that would engender massive ecological disasters in the short run. Hanson’s plan is to mobilize an armada of planes and submarines to Franklin’s small Caribbean base at Saint Emil Island despite the destructive hurricane acting as a shield around the island.

Jaime: Rudy, I don't have time to be sick anymore. I really don't. My bionics are fine. You want proof? Okay, I'll give you proof. (looks around her bed, then grabs a metal water container) Here's proof, right here. (aside to Steve) This trick's a little easier with a tennis ball, but... (proceeds to bend it out of shape)
Steve: You're in trouble now, Jaime. That's destroying hospital property. That's a felony if they want to press charges.
Jaime: Oh, dear. You will wait for me, won't you, till I get out?
Steve: Sure.
Jaime: Okay, so what? Am I cured or what?
Rudy: Okay, okay, your arm may be alright...
Steve: That's right, Rudy. Her arm is okay, but you're right, we have to check and see how her legs are; if they're strong enough. Uh... why don't you kick in the bathroom door, Jaime?
Jaime: (claps her hands with relish) Good idea! I wonder why I didn't think of that...
Rudy: Okay, okay, I'll take your prognosis!

Admiral Richter: What exactly seems to be happening, mr. Hanson? Can Franklin pinpoint his targets?

Admiral Wilkins: With, eh, all respect, doctor, we don't only fight on sunny summer days. Our attack units are designed for all weather capability.

Steve: So you see, we're not giving up, Jaime. All we need is an atomic submarine.

Commander Gordon: That's it. The mission will have to be scrubbed. We can't launch a raft in this.
Steve: No, wait a minute. I've bailed out of a sub the hard way before. You got a scuba suit aboard?
Jaime: Two suits. (gestures two for emphasis) Two suits.
Steve: Now wait a minute, Jaime. You're not going out of a torpedo tube. Now, you felt the sub. It'll be rough out there!
Jaime: You never promised me a rose garden.
Steve: Forget it.
Jaime: (eyes narrowing) Commander, can an Air Force officer aboard a Navy submarine give orders to a civilian who isn't listening to him anyway?
Commander Gordon: Ah... leave me out of this, you two. We've got two suits up in the forward torpedo room. You decide what happens.
Jaime: (smugly gestures two for emphasis) Two suits.

Steve: I just wish you were stayin' aboard.
Jaime: Hey, how dangerous can this be? Really?
Steve: On a scale of one to ten, about a twelve.

Rudy: I can think of two good reasons why Franklin would bring the storm to the island: Jaime and Steve. Now he could be fighting one of them, or both of them with it.

Callahan: Thunder terrifies me.
Oscar: The time for terror is when the thunder stops, Callahan.

Steve: We gotta get across the dam to Franklin's complex. Lightning might get us. Our bionics attract it.
Jaime: Well, the faster we get past it, the better.
Steve: Let's go.

Dr. Franklin: You'd better go rather quickly.
Jaime: You are coming with me. (Franklin shakes his head) Doctor, would you like me to carry you?
Franklin: Good lord, you wouldn't do that?!
Jaime: I certainly would, and you know that I can. (Franklin doesn't move) Okay. (she makes a move to pick him up)
Franklin: Leave me my dignity, please!
Jaime: It's up to you, Doctor.
Dr. Franklin: Miss Sommers, you're a very determined young woman, with a mind of her own. I've always said that was a defect in a woman.

Dr. Franklin: I don't know. Sometimes it seems the things that aren't really controlable are the best things of all... 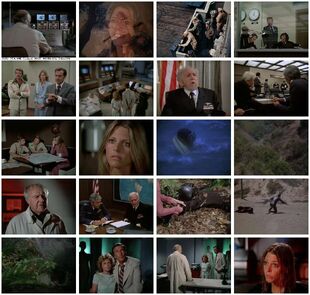 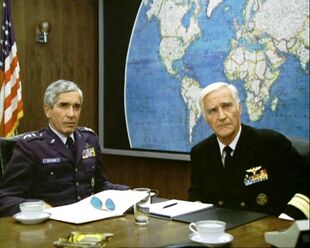 The generals consider their options at The Pentagon 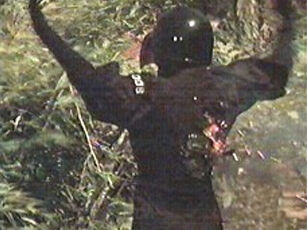 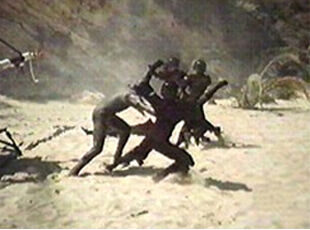 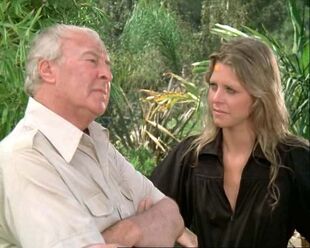 Jaime shares a moment with Franklin on the beach