Undercover agent Marcus Grayson, who was working for Oscar Goldman without Steve Austin's knowledge, had infiltrated a criminal organization, headed by Edward Jasper, that was out to steal the government's secret laser technology.

The face of Johnny Dine, a small-time crook, was rebuilt through plastic surgery to resemble Steve Austin's. The plan, for him to photograph Goldman's files, soon went awry when Dine was caught, then run over and killed in the street.

Austin was naturally curious as to why someone would have impersonated him. Getting a lead on the gang's activities, he used the opportunity to impersonate his own impostor.

Steve was led, ultimately, to a boxing arena that served as the organization's headquarters, the investigation culminating In a wild confrontation in the ring with the criminals. Steve even dared to take on Grayson, not realizing they were on the same side.

Oscar Goldman: Next time you want a holiday, I'll let you have it as long as you're only gone for one day.
John Dine: (posing as Steve Austin) I knew you'd say something like that.

Ed Jasper: Johnny... still not used to that face!
Steve Austin: (posing as John Dine) Well, neither am I.

Breezy: You'r a dead man, Dine.
Steve Austin: You're gonna take me to your boss.
Breezy: No, I'll mess up that brand new face of yours... again. And then I'm gonna snuff you out.
Steve Austin: Any time you're ready.

Oscar Goldman: Steve, I've been coming to the fights here for years, this is some of the best action I've ever seen. Oh, you two don't know each other. Steve Austin, Marcus Grayson.
Steve Austin: How ya doin, Marcus?
Marcus Grayson: I can't complain, Steve.

Oscar Goldman: After what's happened this week, how am I ever gonna be sure that it's you?
Steve Austin: Well, I got an idea, every time I come into the office, you can kick me in the shins. And if I yell, it's not me. (they laugh) 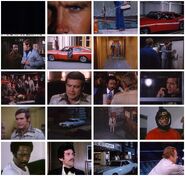 Breezy in the ring

Five!
Add a photo to this gallery
Retrieved from "https://bionic.fandom.com/wiki/Look_Alike?oldid=32772"
Community content is available under CC-BY-SA unless otherwise noted.