Steve runs into beautiful Barbara Thatcher, with whom he was once emotionally involved, and learns that her scientist husband had been killed in a plane crash en route to Lisbon. The romance begins anew and Steve is on hand to thwart a kidnap attempt on Barbara by unknown assailants. Then comes a telephone call from her supposedly dead husband. Steve then flies to Lisbon with her to confront the husband, who is holed up in the consulate of a foreign power.

Steve: You know, Oscar, there's been something I've been meaning to ask you. Do you ever have a leisurely meal?
Oscar: Only on weekends, pal, and sometimes not even then.

Steve: Mrs Thatcher would like to see her husband right away, Mr. Marcos.

Steve: (patting Marcos' shoulder with his non-bionic hand) Do exactly as I say, or I'll break your neck.

Barbara: Oh Steve, you have a wonderful way of making things easier... and harder at the same time. 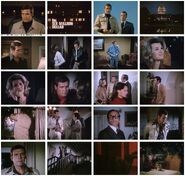 Add a photo to this gallery
Retrieved from "https://bionic.fandom.com/wiki/Lost_Love?oldid=32762"
Community content is available under CC-BY-SA unless otherwise noted.