When a bumbling crook films Jaime using her bionics, he blackmails her into helping him rob a bank.

Jaime confronts a burglar in the act of robbing Jim and Helen's home, but "Inky" flees and tells his boss about her.  Not believing him, the boss kicks Inky out of his professional fencing operation, denying Inky any future income.  Vowing to prove his story true, Inky returns to Jaime's house the next day, discovers that she'll be gone quite some time and hides in a tree after damaging several things around the Elgin property to see if she can fix them.

Jaime comes home and, puzzled, does indeed bend everything back into shape -- all under the watchful eye of Inky and his Super 8 portable video camera.  Rather than reveal himself right away, Inky hides out in Jaime's car, carjacks her and makes her drive to his apartment building, where he intends to blackmail Jaime into helping him pull off a bank heist the next day.  Inky's pet chimp, Ralph, though, fouls up Inky's plan by jumping on him, allowing Jaime to grab his gun and turn the tables on Inky.

But the gun is unloaded, so Inky still has the upper hand.  And he threatens to make the videotapes he made of her bionic superpowers public unless Jaime cooperates in his plan to rob First National Bank the following morning.  Oscar, too, wants Jaime to help Inky rob the bank, but only so he can nab Inky for his third felony, and "have him sent to Alcatraz."

Jaime arrives at Inky's place the next morning dressed for action.  As she, Inky and Ralph head out, none of them -- or Oscar and the police, who are also following their every move -- know that Inky's former employer is shadowing the operation, too.  Once Inky and Jaime come out of the bank, they're confronted by Inky's former coworkers, who spirit them out of the rapidly closing police dragnet, only to deliver them back into the clutches of "Mr. Talvin," who relieves Inky of his ill-gotten gains and directs his thugs to knock Jaime out and stuff her in a shipping crate!

Jaime escapes with ease, but Inky is shot, and Jaime must come to his rescue, along with Ralph, who will have to do the one thing Inky always forbids him to do -- ring the burglar alarm bell -- to save all their lives!  Ralph comes through, and Jaime sneaks him and Inky out while the cops and Oscar are taking down Inky's former associates.  Later, she reassures Oscar that Inky is no longer a threat, as she, the reformed thief and his beloved pet eat the carrot cake Jaime was bringing to the teacher's meeting when Inky so rudely interrupted her.  In a moment of comic genius at the very end, Inky casts some doubt on whether he's really ready to go straight when Jaime asks him "How's it taste," and he replies: "Like a MILLION BUCKS," which prompts a stern but sweet: "Inky!" from her, bringing the episode to a close.

Inky: Well, I got a bottle of liquor dumped all over me.

Jaime: (holding Inky's gun on him) Hold it.

Inky: It's not loaded. Take a look - there's no clip in there. I hate guns.

Jaime: (turns the gun over and looks, then tosses it on the bed) So do I.

Oscar: Do you have any idea what you're dealing with? I ran a fast check on this character; this is the file on him. Carl Inkervoya, also known as 'Inky.' He's got a string of arrests as long as your arm...

Jaime: Which he knows all about...

Oscar: ... mostly petty thefts. He's not wanted for anything now, but he's gone down on grand theft twice. The last time he was caught because a... because a monkey triggered the burglar alarm?!

Jaime: (laughing) I can believe that!

Oscar: What if you continued to go along with him?

Jaime: You want me to become a bank robber?

Oscar: Help him with the robbery - and I'll be there to catch him for his third felony.

Jaime: You want me to set this man up?

Oscar: I can pull some strings, Jaime, and have him sent to Alcatraz.

Jaime: Alcatraz is closed down, Oscar.

Oscar: You're beginning to get the idea, babe.

Inky: I got myself a partner.

Saul: Inky, the last woman you had in here was really amazing. She looked like Big Foot.

Inky: (to Ralph the chimp) Go on, banana brains

Jaime (to Inky asking about her carrot cake): How's it taste? 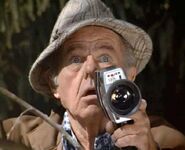 Jaime is filmed by Inky

Inky blackmails Jaime
Add a photo to this gallery
Retrieved from "https://bionic.fandom.com/wiki/Once_a_Thief?oldid=31993"
Community content is available under CC-BY-SA unless otherwise noted.