When all 23 residents of the small town of Norris appear to have died simultaneously from an unknown cause, Steve Austin dons a spacesuit and ventures into the town to investigate. He soon discovers that everyone was only unconscious. Dr. Chris Forbes utilizes narcosynthesis in order to elict the memory of what occurred from the residents.

The cause is eventually identified as being high frequency sound waves. The source of these is soon revealed: deranged former OSI employee Dr. Stanley Bacon is embittered that the OSI failed to continue his work into the military benefits of using high frequency sound waves to immobilize enemy forces. He demands a $10 million ransom and threatens to use his technology to kill people if his terms are not met. The government refuses to pay up believing that the sound waves cannot be fatal.

However, anticipating that this will not be the case – as is soon confirmed – Steve defies the orders of Oscar Goldman and surrenders himself empty handed to Dr. Bacon and his men. Imprisoned in -20°C conditions in a walk-in freezer, Steve has precious little time to escape and stop Bacon from carrying out his murderous intentions. The cold conditions severely impair Steve’s Bionics but by severing a gas pipe and igniting it in order to gain a blowtorch effect, he eventually succeeds in escaping.

As he runs towards the location of Dr. Bacon’s control van, his bionics slowly regain their full functionality. The high frequency sound waves are on the verge of causing death - in the temporary camp set up to deal with Bacon - when Steve destroys the van by launching a large metal fence post at it.

Oscar: What are you doing, what is this?
Steve: It's a roll bar for my dune buggy. I figured if you ever run out of things for me to do, I'll open a machine shop.

Oscar: We've ordered the army to seal off the town.
Steve: Well what's the name of the town?
Oscar: A place called Norris.
Steve: Norris? I went to high school 20 miles from there.
Oscar: Steve, will you stay out of this, please.
Steve: But Oscar, I know those people.
Oscar: You're too valuable for this job, besides I've got another assignment for you. If I need you, I'll let you know.
Steve: Well fine Oscar, you do that. You can reach me at Army headquarters in Norris.

Dr. Forbes: Well, thanks for saving my life, but would you mind telling me how you did it?
Steve: Did what?
Dr. Forbes: Jumped across the room like that.
Steve: I eat a lot of jumping beans.
Dr. Forbes: (disbelieving) Steve!

Dr. Forbes: Oscar Goldman has a reputation for getting things done. Have you known him long?
Steve: About a year.
Dr. Forbes: Is he your boss?
Steve: He thinks so. (Steves pauses, then adds) No, that's not fair. I like Oscar. He's bright, straight, and underneath that shell of red tape, he's even got a heart.

Dr. Forbes: (in regard to his being bionic) Steve, how has it affected you? What does it feel like?
Steve Austin: (dripping with sarcasm) It feels just peachy, Doctor!

Bacon: (examining Steve Austin) A pulse on one side only?

Bacon: Do you realize that for one sixth of your cost, they could have had my weapon system perfected?
Steve: I think you've given them some second thoughts about that.

Bacon: In order to make them understand I must destroy government property. In this case a battalion of the army, our friend Oscar Goldman, and for the cherry on top, you, Mr. Austin. I will reduce you to a six million dollar pile of junk.

Steve: Say, what ever happened to Peanuts Donnely, that kid I used to play football with?
Joe: Oh, oh, Peanuts. Well, he was killed in Vietnam. One of the first ones.

Oscar: How do you tell a man who saved your life that he disobeyed an order?
Steve: You don't.
Oscar: I agree with you.

Dr. Forbes: Want some company?
Steve: Ok, eh, if you don't ask a lot of questions.
Dr. Forbes: No, I don't have any questions. I figured you out all by myself.
Steve: Oh, and that's the end of your curiosity?
Dr. Forbes: My medical curiosity...
Steve: You know, I just ran that through my computer.
Dr. Forbes: And?
Steve: I like the read-out.

As the first episode of the first season, "Population: Zero" includes many firsts:

1. NASA Flight-Com, the flight communications officer on the ground,
2. The B-52 pilot carrying the lifting body,
3. An SR-71 Pilot, and
4. Four lines from Lee Majors inserted in.
Since most of it is coming from recorded transmissions, then mixed in with the music and sound effects, the spoken flight communications dialogue is often hard to understand and has been misinterpreted/misquoted by many fans over the decades. The following is a transcript from the actual dialogue, which has been triple checked against the audio of the intro, for accuracy (it also corresponds with DVD subtitles).

Flight Com: It looks good at NASA One.
SR-71 Pilot: Roger.
B-52 Pilot: BPS arm switch is on.
Flight Com: Okay, Victor.
B-52 Pilot: Landing rocket arm switch is on, here comes the throttle, circuit breakers in.
Steve: We have separation.
SR-71 Pilot: Roger.
B-52 Pilot: Inboards and outboards are on. I'm coming forward with the sidestick.
Flight Com: Looks good.
B-52 Pilot: Eh, Roger.
Steve: I've got a blowout in chamber three! (The "flying bathtub" Steve is flying has four rocket chambers, according to the novels.)
SR71 Pilot: Get your pitch to zero.
Steve: Pitch is out! I can't hold altitude!
B-52 Pilot: Correction: alpha-hold is off, threat selector is emergency--
Steve: Flight-com, I can't hold it! She's breaking up! She's brea--
Austin's aircraft crashes. Cut to a view of a surgery in progress and a still image of Austin.
Narrator (Executive Producer Harve Bennett): Steve Austin. Astronaut. A man barely alive.
Oscar Goldman: We can rebuild him. We have the technology. We can make him better than he was. Better, stronger, faster.

There are many issues arising from the description of bionics in this episode:

There is also no specific explanation as to why Bacon's truck explodes so violently. The nature of his weapon appears to be purely electronic, with no indication of any combustable compounds or unique energy sources. Of course, this was the 1970's, so it was not uncommon for vehicles on action-adventure series to be prone to overly dramatic detonation. 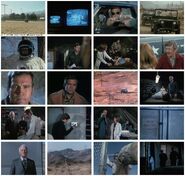 Steve talks to Taylor as he is being treated through narcosynthesis.

Steve races to get Bacon.
Community content is available under CC-BY-SA unless otherwise noted.
Advertisement