Return of the Robot Maker

Dr. Chester Dolenz has gone back to the drawing board after his tests in Run, Steve, Run to create the ultimate in robots and fashions it in Oscar Goldman's image.

Dolenz kidnaps Oscar at his OSI office. He then orders Oscar's double to persuade Steve to penetrate a series of booby traps and gun nests at Fort McAllister's secret Brahmin Project, where a powerful new energy source is being developed. Ostensibly to test the security system, Steve is told the defenses will be non-lethal for the "exercise."

Instead, Steve braves real machine guns and mines while the robot uses the diversion to steal the Brahmin plans. Steve survives the ambush, tracks Oscar's mechanical duplicate back to Dolenz's hideout, and defeats the robot in an epic showdown. Dolenz is arrested, and would not return, although robots would continue to menace the OSI for years to come.

Barney Barnes: Here it is: la pièce de résistance. A pinnacle of my achievements. (pulls out a piece of cloth, straightens it)
Steve Austin: A bulletproof tablecloth?
Barney Barnes: No, no, no, no, a bulletproof vest! Look, forget the material just look: thin as a waver, light as a feather. This won't restrict your movements like a regular bulletproof vest. But it'll stop an eight millimeter shell and give you ten cents change.

Robot: (picks up phone) Sally, go to the top secret vault and bring out the Brahmin file, will you?

Dr. Chester Dolenz: Let me introduce myself. I'm Doctor Chester Dolenz. I believe you are familiar with my work. Steve Austin has seen it before. I make robots!

Dr. Chester Dolenz: I don't want you to think of me as your enemy, Mr. Goldman. May I call you Oscar?
Oscar Goldman: It won't work, Dolenz. Steve Austin and I know each other too well. You can't keep this up for long.
Dr. Chester Dolenz: I've made mistakes in the past. I know, Steve Austin said my first robot squeaked. But this time I've foreseen every possibility. This new robot is a supreme mechanism. Every human detail has been painstakingly reproduced. This robot eats and drinks. I've installed an incinerator to burn up all of the fuels and foods ingested into the body. It thinks! It can even simulate breathing.

Steve Austin: You know Oscar, you tell that joke about three times a week.
Robot: It's the only one I know.
Steve Austin: Yeah, but if you learned another one, then you'd have two.

Steve Austin: Oscar, how did you do that?
Robot: Hm?
Steve Austin: Well, that coffee, it's scolding hot.
Robot: Well, I have the perfect, eh, stomach for working in Washington, Steve, I can eat anything, I can drink anything, I just burn it up. It's cast iron.

Steve Austin: (to Oscar's impersonator) You know, you talk about that computer like it was your brother or something. It's just a bunch of wires, dumb wires.

Dr. Chester Dolenz: Steve Austin, I find this dificult to say, but you've certainly earned my respect today. My hat's off to you.
Steve Austin: Well, as far as your work is concerned, Dolenz, I'll have to say the same.
Dr. Chester Dolenz: I must say that makes me feel a good deal better. (to police officers) I'm ready.
Steve Austin: (as the police leads Dolenz away) And Dolenz? This one didn't even squeak.

Oscar Goldman: By the way, just out of curiosity, how did you know which one of us was me?
Steve Austin: Very simple, Oscar. Robots don't sweat when they're nervous. 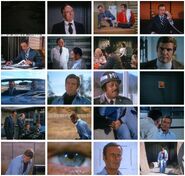 at dinner with Amy and Denise

Oscar seems in his cups

the real Oscar's mind is recorded

the robot hurls a mainframe