Convinced by Oscar that he needs to rest, Steve travels to Utah to visit an old friend, only to discover that his bionics are being put to the test by an old nemesis, Dr. Dolenz, the robot maker.

Robot creator Jeffrey Dolenz is hired by crime boss Mr. Rossi to build a team of bionic robots to steal gold from Fort Knox. To assist him in his planning, Dolenz closely monitors Steve Austin and sabotages an elevator on a construction site to test his bionic abilities. Steve manages to halt the plummeting elevator using his bionic arm and, shaken by his close escape, reports the incident to OSI head, Oscar Goldman. Certain that someone who has knowledge of his bionic strength is out to get him, Steve speculates on who that person might be. However, Oscar is unconvinced.

Steve decides to get away from Washington and flies to Salt Lake City to stay with an old family friend, Tom Molson, on his ranch. He is collected at the airport by Suzie Lund, the beautiful, but insecure, daughter of Molson’s partner. Early the next morning, Suzie arranges some bull riding and, eager to prove herself to the men, has the first ride. When she is subsequently thrown from her horse and badly winded, Steve races to her rescue. Unaware that Dolenz and Rossi have followed him to Utah and are watching closely from a distance, Steve later reflects further on who may be behind the attempt on his life. He recalls his fight with the Fred Sloan robot and the fact that Dolenz later evaded capture. Steve then telephones Oscar in Washington and asks him to find out the latest on Dolenz’s whereabouts.

Later, Steve and Suzie go riding and, during a pause to tie up some stray horses, one of Rossi’s men deliberately fires a rifle at Suzie's horse, causing it to panic and bolt. Steve runs after the rider and horse at bionic speed and soon captures and restrains them. A fascinated Dr. Dolenz informs Rossi that he calculates that Steve was running at 61 mph, but an unimpressed Rossi replies that he has had enough of observing Steve; the time has now come to capture him and analyse his bionics more closely.

Back at the ranch, Steve also tries his hand at some bull riding and, with his bionic strength, he quickly tames his mount. He then takes a telephone call from Oscar, who informs him that Dr. Dolenz is still a wanted man and that flight records indicate that Dolenz was on the same plane as Steve when he flew out to Salt Lake City. Now certain of the identity of his assailant, Steve obtains some provisions from Molson and rides off to a remote part of the ranch in search of Dolenz. Suzie attempts to follow Steve, but he insists that she go back. Before long, he is confronted by two of Rossi’s men; during a fight with them, he is rendered unconscious by two tranquilizer darts fired into his back. Fortunately, Suzie sees what has happened and rides back to the ranch at great speed to raise the alarm. Steve is taken to a barn where his arms are chained to the roof beams and his feet encased in concrete. Dr. Dolenz prepares to cut open Steve’s bionic arm, but Steve warns him about the danger of radiation from the atomic power source. Meanwhile, Molson and his men come to the rescue on horseback and a gunfight takes place. With his captors distracted, Steve uses his bionic strength to free himself. When Rossi and his men flee in a truck, Steve runs after them, eventually brings the truck to a standstill and captures the men. However, Dr. Dolenz manages to sneak out of the barn and, once again, avoids capture.

Dolenz: (explaining his plans for Steve to Rossi) Because that isn't the way science works, Mr. Rossi. First, we must have research, observation to determine his capabilities. Then we take him apart.

Dolenz: He's the reason my first robot's in the junkyard.
Rossi: Dr. Dolenz, we're paying you to build a team of robots that can rob Fort Knox. Now, just what has the man out there have to do with that?
Dolenz: I'm not going to build another robot only to have him destroyed by that man out there. My next robot is going to be stronger and better than Steven Austin.

Tom: How 'bout you, Steve? What have you been up to since you raised all that dust on the moon?
Steve: Oh, nothing much.

Steve: (referring to Suzie's horse) Kind of a mean-looking fellow there.
Suzie: His name is Doomsday. I decide to ride him once or twice before breakfast.
Steve: What if Doomsday decides to have you for breakfast?

Steve: Dr. Dolenz, I presume?
Dolenz: Jeffrey Dolenz, inventor of the robot. I'm sorry about the concrete around your legs and the, eh, chains around your arms, but they're necessary precautions.
Steve: I understand.

Dolenz: (referring to the Fred Sloan robot) Tell me, when did you first suspect he was a robot?
Steve: (thoughtful, then responds) Well, he squeaked when he walked.
Dolenz: (indignant) He did not squeak when he walked. He was perfect in every way. In almost every way.

Steve at the Molson Ranch 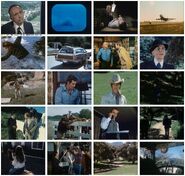