A nuclear submarine is commandeered for the purpose of piracy and extortion. Steve investigates and is captured. To escape he must eluded trained sharks.

Oscar: There's got to be another way. When I was in underwater demolition during World War II we had to block a harbor entrance quickly. We used the NPB427s.

Josh Prescott: Magnetic picket mines? Oscar, you may have just come up with something.

Parker: I probably won't be needing the sharks anymore. Although if you were a different kind of woman you could come with us and use them in an emergency.

Cynthia: I'd agree if you were the emergency.

Josh Prescott: I don't believe it.

Oscar: Of course not, because you don't really know Steve Austin. 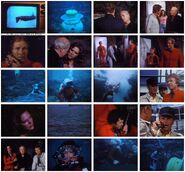 Add a photo to this gallery
Retrieved from "https://bionic.fandom.com/wiki/Sharks_(Part_II)?oldid=23091"
Community content is available under CC-BY-SA unless otherwise noted.