Straight On 'Til Morning

Steve Austin is witness to a UFO at a launch site and, after being dismissed by the ATC and local law enforcement, pursues his own investigation.

Meanwhile, a family of explorers from outer space is marooned on Earth after their spacecraft malfunctions. They are unaware that because of their inherent radioactivity, their touch can do great physical harm to human beings, and vice-versa. They come into contact with humans and each time, both alien and human fall deathly ill.

As the police now believe killers are at large, the hunt intensifies. The alien "father" has the ability to create illusions, and throws off the police, but Steve's eye penetrates the illusion, and he splits off and discovers the alien family.

Steve, realizing that the interplanetary visitors have no hostile intentions, goes to their aid. Steve befriends the alluring Minonee, and while her brother, father, and mother die from their contact with humans, Minonee and Steve can touch without harm - with Steve's bionic hand.

Taking her to the launch site, Steve tears out valuable equipment from a lunar probe to make room for Minonee in order to send her back to her mother spacecraft. The spacecraft rounds the moon, but fails to appear on the "flip side"; the only signal acquired is a cryptic voice message from Minonee: "straight on til morning". Disappointment fills the control room, but Steve knows, thanks to the cryptic message, that Minonee is safe.

"Straight On 'Til Morning" is one of a handful of Six Million Dollar Man episodes to be adapted as a novel. The novelization was written by Mike Jahn, who combined the storyline of this episode with that of "The Rescue of Athena One" (another D. C. Fontana-written episode) for his book, which carried the title of the latter episode. See The Rescue of Athena One (novel).

Steve: Sheriff, I don't want to interfere with your business, but I heard last night you had a report of a UFO.
Sheriff: I didn't know UFO's were a specialty or yours, Colonel. I thought you tested planes and did all that space stuff.

Steve: Was your ship launched from a planet or a larger spaceship?
Minonee: A large spaceship.
Steve: Where?
Minonee: Out there, near Pluto's orbit. (points to the sky with two fingers)
Steve: (quoting J.M. Barrie) Second star to the right, straight on 'til morning.

Steve: Does the saving of one life mean anything to your people?
Minonee: Yes, a great deal.
Steve: Good. Yours is the one we're gonna save.

Oscar: I know what's been going on here.
Steve: Do you, Oscar?
Oscar: I know that four of them landed in a craft that came down at sea. I know that one of them died and disappeared. I know that if anyone touches them, they'll suffer extreme radiation burns and shock. And I know that we can't let any of them escape.

Oscar: Could you give us any information, any knowledge that your people may have accumulated?
Minonee: I've told him everything I know.

Oscar packs it in

Steve is no fool

Did she change her hairstyle? 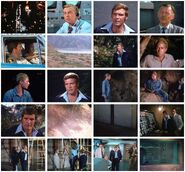