When Max, the world's first bionic dog, runs off in the Sierra Nevada mountains, Jaime and an old flame follow him into a raging forest fire.

Roger: Can I get you a cup of coffee, or something?

Jaime: Oh yeah, I'd love some. Would you mind putting just a -

Roger: (holds up his hand) Teaspoon of cocoa in it?

Jaime: Max was caught in a lab fire when he was a little puppy, and that's what's making him so crazy all the time, is his fear of fire. I mean, you saw - the... the flames from the steaks made him run.

Roger: I know about the APB. They called; they said that Max was dangerous, and that if he attacked, to shoot to kill.

Harley: (taking aim at Max) Got ya, you blood sucker!

Roger: (conversing on CB) Look my girl is out there in the middle of it. Willy, I got to go get her.

Tyler: You'll do more to help her where you are.

Roger: Look I don't see it that way... I lost her one time, and I'm not about to lose her again.

Jaime: Max attacked me, and got my arm...

Roger: (stunned at the wires in her arm) Jaime!

Roger: Well, what is it?

Jaime: It's bionics; I'll tell you about it later.

Jaime: Yeah. When he was running away from me, he... uh... apparently, when they shot him, it caused a short circuit in his jaw, and... uh... I guess the electricity's been affecting his mind. So I jerked on a couple of wires when he jumped on me... I guess that did it.

Roger: Everything seems to be okay. (tries pulling the deadman switch) Argh... I spoke too soon - the deadman's stuck.

Jaime: That's an encouraging name. What is it?

Jaime: In case the engineer turned into a dead man? Here, lemme try. (pulls the deadman switch) There you go. See, it's easy. You'd be surprised what else I can do.

Roger: We're pushing too much weight.

Roger: Like another locomotive! (Jaime hops out of the cab) Where're you going?

Jaime: Open the throttle! (pushes the train until it gets going)

Roger: Can I ask how you did that?

Rudy: (Max is licking Jaime's face) Max, I'm sure your licks are beneficial, but the oxygen will do her more good.

Rudy: Well, I guess I'll become a dog shrink and I'll try to help Max overcome his fear of fire.

Jaime: Not in the lab, huh?

Rudy: Not in the lab.

Roger: But where will you keep him, eh, after he's gotten over it?

Oscar: We're not sure, we might give him to Jaime.

Jaime: (smiles) That's a good idea. Except I get visiting privileges, you know

Oscar: We'll consider it. But the final decision is up to Max. 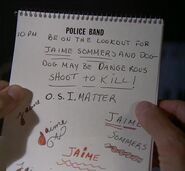 Add a photo to this gallery
Retrieved from "https://bionic.fandom.com/wiki/The_Bionic_Dog_(Part_II)?oldid=32987"
Community content is available under CC-BY-SA unless otherwise noted.