After appearing on The Six Million Dollar Man for a total of four episodes,* the character of Jaime Sommers as portrayed by Lindsay Wagner launched a new series on ABC with Welcome Home, Jaime. A mid-season replacement, as was the first season of its predecessor, Season One ran for 13 episodes in the spring of 1976, establishing Jaime's new life in Ojai, her work for Oscar Goldman, and a changed relationship with Steve Austin.

Regulars crossing to the new show from The Six Million Dollar Man would be Richard Anderson and Martin E. Brooks while Lee Majors would be a recurring guest star. Ford Rainey and Martha Scott would be returning as Steve Austin's parents and Jaime's foster parents Jim and Helen Elgin. Also returning from The Six Million Dollar Man would be villain Carlton Harris. Recurring characters introduced include Romero, Mark Russell and Lisa Galloway. Jaime's students at the Ventura Air Force Base School would be a recurring presence as well.

Producing would be the creator of Jaime Sommers, Kenneth Johnson, who was simultaneously producing Season 3 of The Six Million Dollar Man.

The series' theme would be provided by composer Jerry Fielding. This would accompany an intro for the show that, like The Six Million Dollar Man before it would recap the tragedy that made our protagonist bionic. The "wireframe" graphics from the earlier show would be revisited here, with more detail and color. The typeface used in the credits is Carleton. A substantial amount of text "data" is displayed in a different computer-style typeface, which would change slightly after Season One, and even lose one line, "Second Bionic Replacement Complete" after "Angel of Mercy," the third episode. (This is not apparent in the 2010 DVD release, however, which uses the pre-Angel of Mercy credits sequence for the entire first season.)

Season One would end the year ranked 5 in the Nielsen ratings and established the tone of the show, as distinct from its predecessor. As it would turn out, it would be distinct from that which followed as well.

Strong enough for a man; yet made for a woman

Canyon of Death
Add a photo to this gallery

“Welcome Home, Jaime," long believed to have debuted as an episode of The Six Million Dollar Man, appears to have aired Wednesday, January 14, as an episode of The Bionic Woman. Unlike later episodes to be moved between the series, the credits and supers were all conformed completely to The Bionic Woman standard. The use of SMDM music, the use of SMDM-style type for the "To Be Continued" at the end, are vestiges of a version that may never have aired on television. 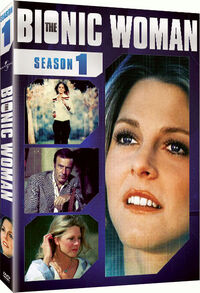 Season 1 of The Bionic Woman was released in Region 1 on DVD on October 19th, 2010. Included are all 14 episodes of Season 1, plus Jaime's 4 episodes on Six which led to the spinoff, "The Bionic Woman (episode)," "The Bionic Woman (Part II)," "The Return of the Bionic Woman" and "The Return of the Bionic Woman (Part II)." Also included are a "Bionic Beginnings" featurette, a gag reel and photo gallery. While the episodes are remastered with excellent color and sound, a new title sequence replaces those found in prior releases, consisting mostly of the early "sepia tone" version, excepting the correct "Jaime" spelling in onscreen text to be found in the "A Thing of the Past" intro and later. Music under these titles are as original.

Retrieved from "https://bionic.fandom.com/wiki/The_Bionic_Woman:_Season_1?oldid=33466"
Community content is available under CC-BY-SA unless otherwise noted.