Steve travels to Asia to find important documents in the wreckage of his father's downed World War II spy plane. In the process, Steve wants to prove, once and for all, if his father bailed out, leaving his crew to die.

Oscar Goldman briefs Steve Austin on an earthquake in the Himalayas which has uncovered a USAF DC-3 that was brought down by enemy fire during World War II, close to the Chinese border. The aircraft, nicknamed "My Little Girl," was carrying secret papers from Chinese Nationalists intended for the Russian government. Steve’s mission is to locate the aircraft and return the papers to the U.S. Oscar also informs Steve that the pilot of the DC-3 was Steve's late father, Captain Carl Austin, and that according to the official record, he had bailed out of the aircraft, abandoning the rest of the crew members to their fate.

Steve goes to visit his mother, Helen, at her home to tell her of his forthcoming mission and to ask why she had never told him much about his father. Previously, the only details Steve had known were that his father had been a pilot and that he had been killed in action when Steve was only two years old. Helen replies that she does not feel that her late husband would have abandoned his crew in the way the official report portrays. However, she concedes that if he had done so, he would have felt so ashamed of his actions that he would have been unable to return home to his family and look them in the eye.

The aircraft wreckage is located high on a mountain, and Steve, therefore, receives training from an experienced local climber named Chin-Ling before they both fly out to Asia. Over the target area, they parachute down, but, on landing, are immediately confronted by a local tribe of men on horseback. Chin-Ling informs Steve that, as a white man, Steve is considered by the tribe to be of value and that they intend to sell him to the Chinese. However, their intention is to kill Chin Ling. Steve runs off at bionic speed in a bid to create a diversion and allow Chin-Ling to escape, but Chin-Ling is shot dead as he runs away in the opposite direction. Having escaped the tribe, Steve is then held at gunpoint by an American man, called simply Garth, who is living in the area. Garth tells Steve that the leader of the tribe, Queng-Dri, allows him to live among them in return for selling stolen goods. He then takes Steve to his home and, much to the disapproval of his wife, offers to help Steve in his search for the DC-3.

Early next morning, Steve and Garth begin their climb of the mountain. During a break, Steve fully explains who he is and why finding the aircraft is so important to him personally. They resume climbing and finally they reach the ledge where the DC-3 is located. An emotional Steve finds the remains of one of the pilots still sitting in the cockpit; but to his profound disappointment, the man’s identification tag names him as Christopher Bell. No other crew can be located, and Steve therefore has to conclude that his father did, indeed, bail out after all. Bitterly disappointed, Steve helps bury the pilot and recovers the bag containing the secret papers.

Meanwhile, Queng-Dri and his men visit Garth’s wife, and she tells him that Steve forced Garth to climb the mountain at gunpoint. Having searched Steve when they first confronted him, the men know that he came on the mission unarmed. They therefore decide to wait for the two men to return down the mountain. Steve and Garth are subsequently attacked, and Steve has to use his bionic powers to defeat the tribe. Garth is seriously injured during the attack; as he lies on the ground, he tells Steve some devastating news: he is, in fact, the real Christopher Bell, and that it was he who had bailed out of the aircraft in disgrace all those years ago! He had later located and returned to the wreckage and swapped tags with the pilot who had died in the crash. This was Steve’s father, Carl Austin, whom Steve had just helped bury on the mountain.

Carl Austin is subsequently exhumed and buried in the U.S. with full military honors.

Steve: (to his mother) Say, what's that new perfume I smell? Chicken soup?

Helen: Are you all right, Steve?
Steve: Oh... sure, I'm fine.
Helen: Now, you know I can always tell when you're fibbing.

Steve: Well, I can't give you much of the details. It concerns an old World War II aircraft. It was nicknamed 'My Little Girl.'
Helen: 'My Little Girl'; that was your father's plane. He used to call me that.

Chin-Ling: See, I told you and Mr Goldman; those bionics of yours don't work when you're climbing a real mountain.

Chin-Ling: Your white skin's gonna save you, but I haven't got a chance. That's what he just said. You're worth cash to them; they're gonna sell you to the Chinese. But I'm just excess baggage; they're gonna kill me. So if you ever used your bionics, use it now.

Garth: Risking one's life for a countryman is a rare gift. Please, do not take it away from me.
Kai-Sing: Garth, who is he to you that you should risk your life for him?
Garth: We'll discuss this no further.

Garth: Don't you underestimate Queng-Dri. You know, he's not an ignorant man. Why, he speaks and steals in five languages.

Garth: You know, your questions are much deeper than your search for a missing airplane. Just what are you looking for?
Steve My father.

Queng-Dri: I wonder if he can escape... a bullet. 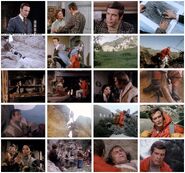