While working on a project to track UFOs, Dr. Rudy Wells and Ray Fisk are abducted by a flying saucer.

Oscar Goldman watches helplessly as Rudy and Ray Fisk are apparently beamed into a flying saucer at the end of a pier. The police and media descend on the pier, and Jaime sees Oscar on the news.

Jaime makes her way down to find Oscar, where he tells her what he saw. Casey, a reporter at the scene, sees Jaime talking to Oscar and begins following her.

Bill Robbins, the Chief of Domestic Operations for the OSI, takes Jaime to a barn, then below to an underground lab where Rudy and Larry have been working. In the lab is the most sophisticated tracking system ever developed, invented by Rudy and programmed by Ray. They have been using it to track UFOs in southern California as a test. It shows the UFO that abducted Rudy went down the coast, up a cliff and out into space.

Casey gets Mrs. Fisk to talk to him under false pretenses, but she kicks him out. Then she gets a call- from Ray! Ray has sold the secret of the tracking system, and he and Rudy are alive and well.

Jaime walks along the beach, following the path of the UFO. Casey follows, refusing to be left behind at the cliff. She lets him catch up and he immediately grills her, which Jaime deflects. As they walk, Casey discovers Rudy's hat and accuses Jaime of being part of a coverup. A car passes and it's Norma Fisk, on her way to rendezvous with her husband and close the deal.

Casey and Jaime follow in time to see the UFO arrive and "abduct" Mrs. Fisk. It looks convincing, but Jaime bionically hears the Fisks talking about finishing the operation and a new life in South America. Casey happily concludes that it's part of a government conspiracy and takes the Fisks' station wagon in pursuit of the UFO. As Robbins tracks the UFO, Jaime runs after it. When it arrives at a landing pad, the tracking system shows it taking off into space, while Jaime sees it settle down on the pad, and the illusion of a UFO fade to reveal a helicopter.

Jaime watches the Fisks exit the chopper and meet with Mr. Spencer, Ray's buyer for the plans. As they go inside, Jaime investigates the chopper. Inside, Spencer double-crosses the Fisks and locks them in the freezer. Back at the chopper, Jaime turns the holographic projector on and off just in time for Casey to arrive and see Jaime, reinforcing his view of her as a conspirator. As he confronts her on her supposed complicity, Spencer's men, attracted by the holo projector's sound, converge and attack. Jaime tears off one of the projectors from the chopper and subdues the men, but backs down when Spencer threatens to kill Rudy. Spencer throws Casey and Jaime in the freezer with the Fisks, clubbing them for good measure.

When Jaime comes to, her bionics are already starting to malfunction from the cold, and Rudy tells her to get help warming up her arm. As they do this, the chopper has been repaired and Spencer's men come to get Rudy. Just then Jaime busts the door open and knocks down the guard with a giant piece of furniture.

The three, Casey Rudy and Jaime, flee pursued by the "UFO." Realizing they want Rudy alive, Jaime takes Rudy's jacket and runs with it on. They chase her, and realizing that it isn't Rudy, start shooting in earnest. Finally, Jaime hurls a rock, which hits the chopper, disabling the hologram and causing a forced landing, just as the police arrive.

Later that night, Casey picks up Jaime at the barn to take her to dinner. His story left out the classified information thanks to the example of the Fisks doing prison time for treason. Failing to appreciate his good fortune Casey can't resist grilling Jaime again as they drive off.

Jaime: Wow... for a barn, this is quite a laboratory.

Jaime: Well, what is it? What goes on here?

Bill: Well, what you see here is the, uh, control center for the most sophisticated tracking system in the world.

Jaime: And it just happens to be located underneath a barn in Southern California.

Bill: Mmm-hmmm. But, there's a method to the madness.

Bill: Now, Rudy created this system about two years ago, but the OSI couldn't rationalize building it until they found something to test it on.

Jaime: What are you testing? Low flying chickens?

Casey: (panting from exertion) Listen, you can save us a lot of trouble by not trying to con me. I know you didn't come up here for the view, and neither did I.

Jaime: Well, what'd you come up here for?

Casey: To ask you some questions. How'd you get up here so fast?

Casey: What's the OSI got to do with this? What's your connection with Oscar Goldman and Bill Robbins? And what's in that barn?

Jaime: Y'know, grilling like this usually takes place in a very smoke-filled room with a big white light beaming in on your face - not a beautiful place like this.

Casey: You're being evasive.

Jaime: Mr. Casey. Now, I'm not going to answer any questions I don't feel like answering, you got that?

Casey: Y'know, uh, Jaime, warming up your right arm doesn't make any sense. I got a better idea...

Jaime: (smacks his arm) C'mon, keeping doing what you're doing.

Casey: Y'know, in some parts of the world, we'd have to get married after this.

Jaime: Did you get your story filed?

Casey: Ummm... well, I was tempted, believe me, but when I thought about the Fisks in prison for treason... well, the temptation passed.

Casey: Thank you. But before you get carried away, I've got a few questions to ask you.

Casey: How'd you get that freezer door open?

Jaime: My stomach is growling. Get in the car.

Casey: Hold it... hold it... that helicopter. Spencer said you downed it with a rock.

Casey: You're not listening to me, are you?

Jaime: No, I'm not listening to you!

Casey: Well, you should listen to me - I'm takin' you out to dinner!

Casey: A greasy spoon if you don't answer my questions... 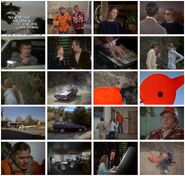 Nena reports the UFO took off into space

Jaime is a patient woman