Oscar's disappearance, after being last heard from in Las Vegas, sends Steve to the desert where the government operates a gold mine. Indications are that Oscar is involved in a plot to steal the gold, and Steve's determination to learn the truth takes him to the mine to find Oscar. After a rescue attempt fails, Steve is forced to toil in the mine against his will. Meanwhile, an old friend of Oscar, Bert Carrington, an official in the Mining and Research Bureau, arrives with plans to smuggle the gold (valued at $25 million) out of the country--and he makes a tempting offer to Oscar for the use of a government plane. Steve evades his captors and races to the rescue.

Oscar: You could have made this look a little more like a legitimate government project.
MacGregor: We brought this bunch of hoodlum deadbeats here to get gold out of this mountain quickly and quietly, period. We're not paying them to try to look legitimate.

Connors: (having arrested Steve Austin for trespassing) Hop right in there, pretty boy; don't get your suit dirty.

(Steve Austin has stopped a runaway mine car using his bionic strength))
Connors: How, how did you do that?
Steve: It runs in the family.
Connors: (panting) Thanks...
Steve: Any time, pretty boy.

Oscar: I can't believe it's you, Bert. You, doing this.
Bert: Please do believe it, Oscar; it is me.
Oscar: My God!
Bert: Oscar, telephone Neville Air Base. Use that eh, "Priority One" code name of yours, 'Snow White.' Use that, and the red tape shall be parted and they will let my millions go.

Oscar (when Steve tries to get him to climb out of the window): (yawning) Steve, I don't think I can make it.
Steve: Look Oscar, Oscar, if you could stay awake during your own escape, it sure would help things.

Steve: Now, Carrington told me that he'd always beaten you, ever since school, at everything.
Oscar: That's true.
Steve: Well, this time he lost.
Oscar: So did I, pal...

Steve runs to catch a plane. 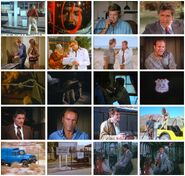 Episode collage.
Add a photo to this gallery
Retrieved from "https://bionic.fandom.com/wiki/The_Midas_Touch?oldid=32749"
Community content is available under CC-BY-SA unless otherwise noted.