Scientists David Tate and Nicole Simmons develop a cell regeneration serum that they feel will eliminate the problems of returning from a suspended state. In the crash of their space capsule--in which they were cryogenically frozen--David gets too much of the serum, resulting in his gaining a great surge of strength, accompanied by periods of violent seizures. He begins terrorizing the countryside, and Steve is forced to run him down.

Steve: Look, Oscar, I'm not one of your eager beavers, you know. Your problems aren't my problems unless you got reasons - reasons that make sense to me.

Steve: (to Rudy) You know, Doc, you haven't changed a bit. Even when you're faking, your bedside manner is terrible.

Steve: You made many jumps, Rudy?
Rudy: Oh, not too many.
Steve: Yeah, I didn't think so: You're putting your parachute on upside down.

Steve: You know, I've never met anyone who's been an experiment like me.
Nicole: How does it make you feel?
Steve: It makes me feel...a little less alone.

Oscar: Too much. Too much to pay for something called science, or progress. All right, I'm in government service, but what am I? What am I, really? I'm just a glorified public servant. So why should I have the power to send a man to this death? Here I am alive, right now, right this minute. David Tate is dead. What is it? Am I better than he was, is that it?
Steve: He knew the risk.
Oscar: Come on, pal, he didn't think for a minute he was going to get killed.
Steve: Look, you didn't force him, Oscar.
Oscar: Oh, come on.
Steve: It wasn't for nothing. You know that serum can open up a whole knew world to research. A way to increase a man's physical and mental potential.
Oscar: Potential? You're talking about man's potential. A man has died here. David Tate is dead, don't you understand that? He's dead!
Steve: Yes, he's dead. But you're still alive to finish what you two started together.
Oscar: Oh, come on, now.
Steve: It takes two, Oscar. You wanted him to do it. But he wanted to do it. In a way he was...he was kind of a pioneer. You couldn't have stopped him if you tried. I know you, Oscar, you're not just a glorified public servant. You're a man who has to keep trying to find ways to improve things. In a way, you're a pioneer, too. Where would I be if you weren't?

The Science Of Cryonics

Space Capsule from "The Pioneers".

Rudy hooks Steve and Nicole together.

Steve and Nicole Simmons must stay while Tate attacks. 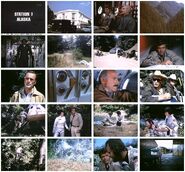 Add a photo to this gallery
Retrieved from "https://bionic.fandom.com/wiki/The_Pioneers?oldid=32738"
Community content is available under CC-BY-SA unless otherwise noted.