Jaime confronts Bigfoot on her way to retrieve an antidote to save Steve Austin's life.

Season Two of The Bionic Woman begins with a bang, as Jaime must save Steve's life, fight off the Sasquatch, and prevent a band of renegade aliens from causing a global catastrophe on their way to world domination. Following on from the Season Four premiere of The Six Million Dollar Man, Part II begins with Steve in a coma, suffering from radiation poisoning, and Oscar disbelieving all talk of the "Bigfoot Aliens". Luckily, Oscar likes his bionic friends enough to loan Jaime a chopper, and she swiftly makes contact with the aliens.

Gillian takes Jaime to Shalon, who after learning about Steve tells Jaime of the rebels and the threat they represent to Earth. Shalon and Jaime make a deal: Jaime will oppose Nedlick and his renegades, while Gillian will take a dose of Neotraxin to help Steve. What they don't know is that Shalon has given her last dose to Steve, at the risk of her own life. Jaime allows herself to be captured and begins to sow the seeds of doubt in the Sasquatch's ear.

Recovered thanks to Gillian's ministrations, Steve and Gillian go to Mexico and the renegade aliens' hideout, where they are holding Jaime, but the aliens have damaged the earth's crust and a geological catastrophe is imminent. Overcoming the aliens is only the first step: Jaime, Steve and the Sasquatch must heal the volcano before calamity ensues.

When the crisis is past, Shalon's sacrifice is revealed, to the great regret of her creation, the Sasquatch, who bears guilt for the tragedy, albeit as an unwitting accomplice. Apploy makes the Bionic pair an intriguing offer, and the aliens and humans part as friends.

Jaime: Oh... there isn't anyway to find anything except birds nests. Take us down as low as you can and hover, alright?
Chopper pilot: Sure.
Oscar: What're you going to do, Jaime?
Jaime: Oscar, I'm gonna hoof it.
Oscar: Jaime...
Jaime: Now, I'll let you know if I find anything. (to chopper pilot) What's your security clearance level?
Chopper pilot: Five.
Jaime: Well, you're about to become a six. See you back at the base. (jumps out of the chopper)

Nedlick: (looking at viewscreen) Another bionic person?
Faler: Good thing that I suggested we monitor the San Angelo area, isn't it? She's probably there now searching for our original complex.
Nedlick: Yes, for a change I'd say you're right.

(Jaime is running through the forest).
Jaime: (calling out) Shalon! Shalon? (hears thudding footsteps) Well, if that's Shalon, she sure has big feet. (realizes what she just said) Oh, no... (Bigfoot tears down a tree to reveal himself) Oh, boy... Steve said you were big, but this is ridiculous.

Gillian: Shalon, this is Jaime.
Jaime: (puts out her hand) Hi, I'm Jaime...
Shalon: Jaime Sommers. (Jaime looks surprised) Yes, the bionic woman, I remember. I remember you from the brain scan I did on Steve. He has very fond thoughts of you.

Shalon: Oh Jaime, I'm so glad you've come to help us.
Jaime: Help you? I, I came to get your help.
Shalon: What?
Jaime: Steve is dying. He has severe radiation sickness. And, and the nuclear power pack in his legs have burst.
Gillian: Sasquatch caused it. They've turned him against Steve, too.

(Gillian and Jaime zap into the jungles of Mexico).
Jaime: Uh... where... where are we?
Gillian: We're in Mexico. Their base is inside that mountain. And with their monitors, they'll see you coming before you see them.
Jaime: (sarcastically) Oh, terrific. Well... listen are you going to go to Steve now?
Gillian: Yes.
Jaime: Okay. Good luck, Gillian.
Gillian: You too, Jaime.
Jaime: Okay. (Gillian zaps off) Waitaminute... uh... well, how do I get home?

Gillian: Jaime will need your help.
Steve: Jaime?
Gillian: I'll tell you in a minute, but we must leave quickly. I think you should be able to stand now. Can you get out of bed?
Steve: I think so. I... (looks under the sheets) I'm gonna need a pair of pants.

Steve: Uh oh.
Gillian: What is it?
Steve: (Sasquatch is running towards them) Old wide eyes is back.

Jaime: What are you doing?
Gillian: I'm turning their TLC's down so slow that they can't move.

Apploy: Her TLC has been reduced to an extreme slowness. It will remain that way until our mothership returns. They'll have a much better chance of saving her than we.
Steve: When will your mothership return?
Apploy: Oh, about a hundred Earth years from now.

Jaime: (to Sasquatch) And you... you get a big bionic hug!

Prior to the comprehensive release, a cue from the final scene was released on "The Film Music of Joe Harnell." Additionally, although not identified as such, the unique tail credits theme used for The Return of Bigfoot (Part II) can be found on the new release "The Bionic Woman - Episodic Collection Vol. 1 - Kill Oscar Parts 1 & 3." It is track #15 of 21.

In September 2008, the entire soundtrack recordings for this episode were released by joeharnell.com. 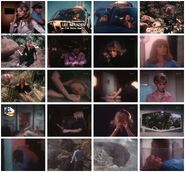 Jaime is overcome by the volcanic heat

Behind the scenes with Wagner and Cassidy
Add a photo to this gallery
Retrieved from "https://bionic.fandom.com/wiki/The_Return_of_Bigfoot_(Part_II)?oldid=32969"
Community content is available under CC-BY-SA unless otherwise noted.