The Return of the Bionic Woman

"The Return of the Bionic Woman" is a story consisting of two episodes of The Six Million Dollar Man in which Steve Austin learns that Jaime Sommers survived her Bionic rejection, but as a result cannot remember him.

Steve Austin, still morose over the death of his fiancee Jaime Sommers, is nearly killed when a mission goes wrong and his bionic legs are crushed. He is taken to Dr. Rudy Wells' hospital for emergency treatment. Whilst there he discovers that Jaime, whom he had seen die from a blood clot caused by Bionic rejection six months earlier, is still alive.

After confronting Oscar Goldman and Rudy, Steve finally learns that immediately following her death Rudy's young assistant, Dr. Michael Marchetti, successfully used cryogenics to preserve Jaime at a very low temperature whilst the blood clot was fully treated. Jaime was then successfully resuscitated and her long recovery back to full health began. But in order to protect Steve from the trauma of losing her a second time should the resurrection fail, he was not told of this.

However, Steve's relief at the news of Jaime soon turns to horror when he finds out that Jaime has suffered some brain damage as a result of her 'death' and no longer has any recollection of Steve and her engagement to him.

Although not directly credited, plot elements from this episode were incorporated into the Bionic Woman novelization Welcome Home, Jaime by Eileen Lottman (published in the UK under the title Double Identity and credited to "Maud Willis").

Oscar: You look a million miles away.
Steve: I was just thinking of... somebody.
Oscar: Anybody I know?
Steve: No, not anymore.

Steve: It may not have affected my eyesight, but boy, my legs must've really got chewed up.
Rudy: Yeah, they were. We had to use a carload of components to rebuild 'em. I'll send you the bill in the morning.
Steve: Waitaminute - I'm still under warranty, y'know.
Rudy: Yeah, well, you were about due for your twenty thousand mile checkup anyway.
Steve: How long will I be in the shop?
Rudy: I'm not sure. You could be on your feet by next week.
Steve: Y'know, Doc...
Rudy: Yeah...
Steve: Tell me something...
Rudy: What?
Steve: And I want it straight... will I ever be able to run sixty miles per hour again?
Rudy: (laughing) Sure you will - eventually - but not for a while, and even then, not very far. Listen... I know you, so don't push it, y'hear?
Steve: I got'cha.

Steve: (threatening Oscar and Rudy) You've got five seconds to tell me what's going on, or I'm gonna start using this Bionic arm you two gave me and throw you both through these walls!

Oscar: We planned to keep Michael's surgery a secret as long as Jaime was in a coma, to spare you... losing her again.

Jaime: I still feel a little strange around new people.
Steve: I understand.
Jaime: It's all just so incredible. All of a sudden, just - here I am.
Steve: It must be hard for you.
Jaime: Yeah... but... it's also fresh too, y'know. Everytime I see something new, or touch something, or... or I meet a new person, it just makes me want more. And I wanna look back, too. I wanna know who I was; where I came from. But it's a little frightening too... ummm... it's like something's haunting me.
Steve: I know you were in a lot of pain.
Jaime: Maybe that's it. All I know is that it's... uh... it's very uncomfortable to think about, and Michael says it could even be physically dangerous if I dwell on it, so...

Jaime: How long have you been bionic?
Steve: About three years.
Jaime: Oh... y'know, sometimes I feel like... uh... like a little kid with a new toy. And other times, I feel like... I don't know...
Steve: I do.
Jaime: Yeah, I guess you do. (bends the bed frame back into shape) What does that make me?
Steve: (puts his hand on hers) It makes you like me.
Jaime: Yeah... y'know, Michael's sweet, and I'm very fond of him, but... you and I, Steve... we're kinda special, I guess, and I'm gonna need you to help me adjust... ummm... help me be bionic.
Steve: Well, you can count on me.
Jaime: (puts her hand out) Be my friend?
Steve: (hesitates, then takes her hand) I'll be your friend, Jaime.

Steve: What are you intentions about Jaime?
Michael: Intentions?
Steve: Well, obviously, you know she likes you a lot.
Michael: Yes, but would you like my medical opinion?
Steve: What do you mean?
Michael: I mean Jaime's showing all the symptoms of the classic patient/doctor infatuation - doctor saves woman's life, woman looks at doctor with amazement, admiration; a kind of desire...
Steve: And how does doctor look at woman?
Michael: Listen, Steve... I'd be a liar if I didn't tell you that I find Jaime incredibly attractive. Her mind is quick, her wit is sharp, and she's a lovely woman.
Steve: Yeah, I know.
Michael: And I know what you two shared before - how hard this must be on you - her loss of memory of what you two had.

Steve: (pokes head around door) Are you decent?
Jaime: (lying on bed) Go away.
Steve: What?
Jaime: I'm on strike today and there's no work.

Jaime: Steve, sometimes I feel like I'm just on te edge of remembering, and then it hurts and it's so frustrating cause I... It's driving me crazy, isn't there anything they can do? 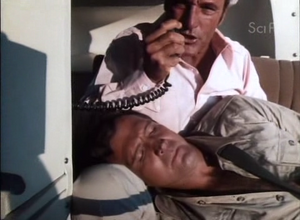 Oscar calls ahead for Bionic surgery 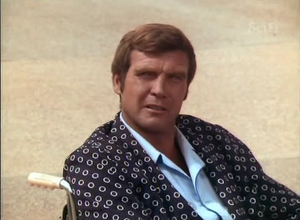 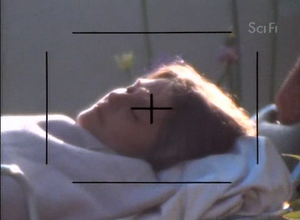 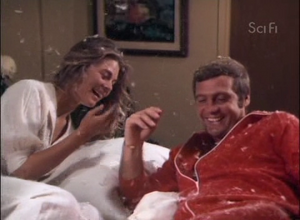 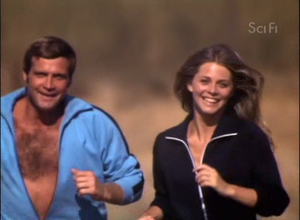 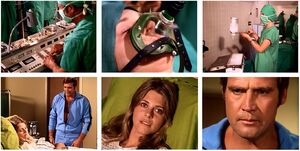