For the novel published in the UK under this title, see The Secret of Bigfoot Pass.

"The Secret of Bigfoot" is one of the best-known storylines in the history of The Six Million Dollar Man. It is in this two-part episode that Steve Austin first encounters the legendary Bigfoot and the alien visitors he protects.

Steve Austin and Oscar Goldman are in a remote region of the California mountains as part of a team working with high tech earthquake sensors. When two geologists - Ivan and Marlene Bekey - disappear in mysterious circumstances tracks of the legendary wild beast called Sasquatch or Bigfoot are found nearby. Ivan is soon found safe but in a state of shock. However, there is no sign of Marlene. When Bigfoot later attacks the team's base camp Steve pursues and fights with the beast unaware that he is being monitored by aliens who are living in a nearby mountain. During the fight one of Bigfoot's arms becomes detached revealing that it is not an animal but some form of robot. Bigfoot flees (complete with the removed arm!) and Steve follows it into a cave. This turns out to be inside the mountain occupied by the aliens and Steve is soon rendered unconscious, captured and analysed by them.

When he awakes, Steve learns from Shalon - a female alien - that Bigfoot was built and controlled by the aliens to protect them. The earthquake sensor team had been attacked as they had identified a volcanic vent that powered the alien colony. Meanwhile Oscar learns that a major earthquake is predicted along the main San Medrian fault line within the next few hours which jeopardises all the Californian west coast cities. Only a controlled underground nuclear explosion to trigger a smaller man made earthquake along a smaller tributary fault line will prevent the main earthquake from happening. Oscar authorises this knowing that Steve and Marlene are still missing in the area concerned and will be at serious risk from the explosion and subsequent earthquake.

"The Secret of Bigfoot" was adapted as a novel by Mike Jahn, who made some changes to the storyline -- including changing the ending -- in order to bring the book within the literary continuity of Martin Caidin. Specifically, in the novelization the aliens' attempt to erase Austin's memory at the end plays out differently: while they are successful in the TV version (and the return appearance of Bigfoot later has to address his loss of memory), in the novel Austin's artificial skull (a bionic replacement not seen in the TV series but featured in Caidin's version) prevents this from happening. Austin's disposition towards the aliens is also considerably more hostile (particularly after the failed memory wipe) than in the episode.

Ivan Bekey: Say lady, how would you like to spend a second honeymoon? Right here. There's nobody around for forty miles.
Marlene Bekey: Discipline, Dr. Bekey. You're here as a geologist, not a husband.
Ivan Bekey: And you, Dr. Bekey, are a slavedriver.

Oscar Goldman: (looking at a giant footprint) What is it, a mountain lion?
Steve Austin: No, it's too big. What do you think, a huge grizzly, Tom?
Tom: No. No, not a cat. Not a grizzly.
Oscar Goldman: Well, what is it?
Tom: There's only one thing in the mountains that leaves a track like this. The creature of legend that roams the Timberline. My people named him Sasquatch. You call him... Bigfoot.

Apploy: (looking down at Steve Austin) He's by far the most interesting man we've seen.

Jaime Sommers: (on phone in classroom) Your office told me that you and Steve were in the California Mountains. I, eh, what are you doing, fishing?
Oscar Goldman: (on other line, on location) I wish we were fishing.

Shalon: You're really very special, Colonel Austin. Are there many more of you?
Steve Austin: ...Yes, there's a whole army of us.
Shalon: (sensors start beeping) Now Colonel, you and I both know that's not true, don't we? 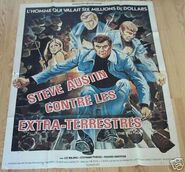 He has seen the Sasquatch! 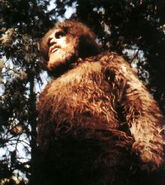 Steve is hoisted by the Sasquatch

Jaime is concerned about Steve

Steve is prepared by Shalon

Shalon scans Steve's memory
Add a photo to this gallery
Retrieved from "https://bionic.fandom.com/wiki/The_Secret_of_Bigfoot?oldid=32446"
Community content is available under CC-BY-SA unless otherwise noted.