The Song and Dance Spy

John Perry is a famous entertainer and former college roommate of Steve Austin. Their friendship notwithstanding, Oscar suspects Perry of being a courier of stolen government secrets, working for an international espionage ring. During a trip to the Far East, Austin sets out to clear his good friend's name.

Steve: Please don't wrinkle my jacket.
John: Well, oh, if you let me wrinkle your jacket, I'll let you wrinkle my hair.

Damon: Why don't you look in my ear, there's a cannon in there.

John: We've got a little surprise for ya, we have a celebrity with us that I'd like to introduce now. He's not a performer, but his eh, TV show thrilled millions of people all over the world. I guess you won't recognize him here on Earth. But on the moon, he is the one and the only, the super astronaut Colonel Steve Austin, how 'bout a hand for him, folks?

In the Manila airport, the public address announcer says a flight is arriving from Andrews Air Force Base in Guam, but the base there is called Andersen Air Force Base.

Steve lifts and removes a double-parked station wagon with the assistance of an off-camera forklift. Initially, only the forklift's shadow can be discerned. But when the camera pulls back, we can clearly see the forklift's "arm" in the lower, right-hand corner of the shot. 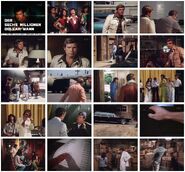