Kuroda, the Japanese pilot Steve had once found hiding on a remote island, unaware the war was over, is asked to investigate reports about a youth reported to be living with wolves on the Japanese island of Hoyoko. Kuroda invites Steve to join him in the search. Despite the objections of Oscar Goldman, Steve goes to Japan because he believes the youth to be the son of a U.S. ambassador and his wife, who were found dead in the wilderness.

Ishikawa: I'll tell my secretary what men you with to take with you and what supplies you will need.
Kuroda: I need only one man to help me, sir.
Ishikawa: One man?
Kuroda: Yes sir. The man who brought me out of the Philipine jungle. The astronaut, my friend, Colonel Steve Austin.

Steve: Falling boulders a common thing around here?
Kuroda: Sometimes. But that was too close.
Steve: Yeah, you can say that again.

Steve: You'd like to stay here with him in the forest, wouldn't you?
Kuroda: Yes. But you are right, we should get the boy back quickly.

Steve: I found a path that will get us to the jeep by dark. (notices Kuroda's foot stuck in a bear trap) You've found another trap, huh?
Kuroda: Accident.

Steve: You know, Kuroda, you've been telling me how hard it is for you to adjust to city life. Imagine how hard it's gonna be for him.
Kuroda: You mean, Gary and I can go back, life in forest?
Steve: For a few months. Then we'll see how it works out. 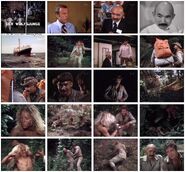