Wine, Women and War was the second of three made-for-TV films broadcast by the ABC network in 1973 in advance of the the weekly series of The Six Million Dollar Man. Whereas the first telefilm adapted Martin Caidin's introductory novel, Cyborg, it was decided to produce an original storyline instead of a direct adaptation of Caidin's second novel, Operation Nuke, although the book does contain some similar plot elements, most notabily the idea of a syndicate offering nuclear weapons for sale.

Although often referred to as a pilot film, it's uncertain whether Wine, Women and War was actually considered as one, as it aired only a few months before the weekly series debuted, meaning the series would have already been in production by the time the film aired. Promotional ads for the film also declare it the premiere of "a new monthly series", although ultimately only The Solid Gold Kidnapping followed in that format before it switched to weekly broadcasts.

After a mission to steal an arms dealer's catalog in Egypt goes wrong, resulting in the death of a lover, Col. Steve Austin is resentful when Oscar Goldman tries to get him to go back into the field. Instead, Austin escapes from the bionics facility and heads for a friend's Caribbean vacation home, unaware that his "holiday" is being manipulated by OSI agents. Soon, Austin meets up with a Soviet colleague and finds himself back on the trail of the arms dealer, with revenge for his friend's death on his mind.

Tamara: (to Steve Austin) You said that you were not leave until tomorrow. Why is it that I feel that I have already lost you?

Dawson: We're to forget what we've seen here. Not just now, but forever. And you're to get on that horn, and tell Air Evac that if they don't break every record in getting here, we're going to lose what must be the most valuable man in the world.

Oscar: We're gonna need Steve Austin on this mission, with... or without his cooperation.

Katarina: (to Steve Austin) I don't think we shall wait until this plane lands to, eh, go our separate ways.

Rudy: (on phone with Steve Austin) You're experiencing a power surge in your hand induced by a sudden adrenaline increase in your system when you're angry. It's a minor adjustment.

Cynthia: (Steve offers Cyn a drink he's just mixed) What's that?
Steve: That is a moonshot.
Cynthia: A which?
Steve: A little number from the Cape. Guaranteed to keep you in smooth orbit.

Steve: Alexi, I didn't realize they paid you Russians enough for this kind of a life.
Alexi: Well it's an American shortcoming to believe your own propaganda.

Cynthia: Oh, is there anything you aren't good at?
Steve: Well, I've never had much success at milking reindeer.

Alexi: (to Steve Austin) Do you still insist that you are no more than an astronaut playboy on holiday?

Steve: (on phone with Oscar) Listen, pal, the next time you want me on a mission, you lay it all out on front, or I'll kick your department so high you'll need Sky-Lab to get it down.

Alexi: (seeing Findletter's stolen Polaris missile) So, the Americans are indeed in the same unhappy boat as we.

Findletter: I don't know what you are, but you know, from what I've seen, you have great commercial possibilities. And when this operation is over, I intend to seriously investigate the possibility of making you the newest entry in my Fall Catalogue.

Katarina: (having just watched Steve Austin break free from his shackles) In Russia they say all American men are soft.
Steve: Yeah, we rise to the occasion.

Katarina: How can you see where you're going?
Steve: I eat a lot of carrots.

Katarina: Maybe we should have taken our chances with Finletter.'
Steve: I guarantee our relationship is heading for a blowup.

Cyn is keeping something from Steve

Steve is glad to see Harry 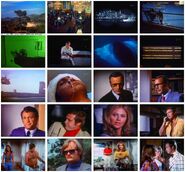 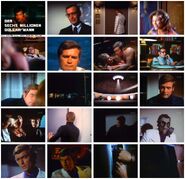 Wine, Women and War originally aired as a 90-minute made-for-TV movie. When the series was released into syndication, this movie was padded out with stock footage and additional scenes taken from later episodes and split into two one-hour parts. This makes the resulting episodes somewhat long and drawn-out; not to mention that the added scenes cause continuity errors.

Wine, Women and War was adapted as a novel by Mike Jahn, who made numerous changes to the storyline and the characterization of Steve Austin in order to bring the book in line with the original literary continuity of creator Martin Caidin. See Wine, Women and War (novel). Changes include the addition of a scene showing Austin sinking Alexi's yacht (in order to prevent Katrina and the guards from following him) and the addition of a scene where Austin kills two Russian agents with his CO2 poison dart gun (concealed in his bionic hand); this confrontation occurs in the novel after Austin leaves Alexi's yacht.